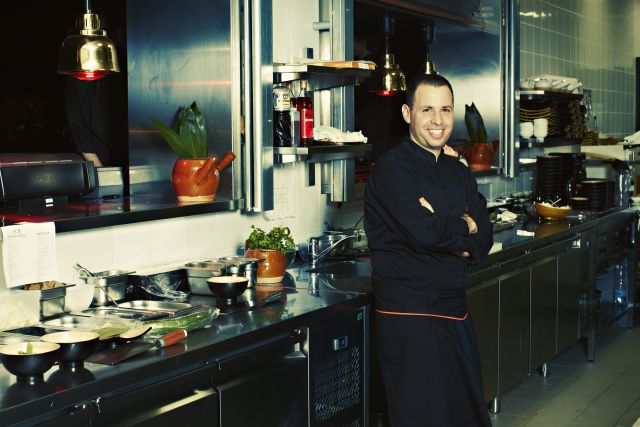 International chef Shahaf Shabtay made a pit-stop in Israel to “tie up some lose ends” regarding a new deal with his Israeli partners on their Sasazu label, which been spreading the Asian lifestyle message. Besides food, additional activities, such as massage, Yoga, pedicure/manicure and cooking techniques are all on the table. “We’re aiming to disseminate the Asian way of life, ” Shabtay explains, “so that alongside the restaurants, we also operate nightclubs under the brand-name.” The message is being introduced, not only in European countries like the Czech Republic and Greece, but also in Cambodia. “We’re currently negotiating primarily with hotels, Shabtai clarifies; “we even have a proposal coming from Budapest.”

Shabtay claims to be busy from morning until night, training teams in Asia, Europe and India to spread the Sasazu gospel.”We’d like to open not more than two centers every year. Work is my life, and I’m totally into this. I see my seven year old daughter three times a month.” Shabtay’s visits rarely last an entire day. Here, he was present for less than 12 hours, but in that space of time, he did manage this interview.

The 37 year old chef hails from Kibbutz Amiad north of the Sea of Galilee. He served in an elite commando unit, after which he studied cooking at the École Grégoire-Ferrandi. He then did a year’s internship at the Odeon in New York, learning in the evenings to bake at the chef Daniel Boulud Bakery. From there, he left for the French Riviera to work as a security guard at the Lily Safra Estate, where he befriended the chef, who initiated him into several of his culinary secrets.

Next on the agenda was Thailand with a married couple he had met in Paris. The three opened a cooking school and Shabtay travelled the region, learning the secrets of the Asian kitchen. Upon meeting Andy Tan, the chef of the Vakzuid  restaurant in Amsterdam, he followed him back home to become his deputy at this French-Indonesian fusion restaurant. When the establishment’s owner École Grégoire-Ferrandi,  decided to open a branch in Mumbai, he sent Shabtay to set it up under the name Zenzi, before opening yet another branch in Mexico. It was in Mumbai where Shabtay met his future British wife, Emma – herself busy establishing a chain of fashion outlets for Next in Asia. Emma and their 7-year old cockney-speaking daughter, Romy lives in a small English village.

The Art of Shahaf Shabtay

In 2005, he returned to Israel as chef of East, and the following year, with his friends Shuki Lehrer and Zohar Arieli, he opened the Mina Tomei restaurant in Tel aviv’s London Mini-stores, in association with the Spaghettim chain. In 2007 an additional branch opened in Herzliya, and in 2008 both restaurants experience financial difficulties and had to close.

That same year, Sasazu opened in the middle of Prague’s entertainment district – a restaurant that becomes a nightclub by dark, and which very soon got a star in the Red Michelin guide. “Sasazu means bamboo leaf, ” Shabtay explains. “We’re bringing the entire gamut of creativity in from South-East Asia – Laos, Cambodia, Vietnam; and the whole idea is at the center of the brand.”

Shabtay has established three restaurants – at the Beograd Hotel in Belgrade, Bago in Cambodia and – in 2010 – a Sasazu branch at the Roses Boutique Hotel in Rhodes.

At present he is working as a consulting chef for the Qli Company, which owns hotels and casinos around the world. He sets up restaurants for the chain, creates their menus, teaches the cooks and continues advising them. The restaurants are a combination of Asian kitchens, mainly Vietnamese, Indonesian and Singapore, using French cooking techniques.

“I studied all the cooking stages in Paris, nut it’s against my nature to put something in the oven and wait for two hours. That’s why I feel connected to Asian food. There, you can add and change – crispy or soft, steam… it’s all in my hands and each time it comes out different. I like it when it’s never the same. It has speed, charm and a mixture of tastes, and it’s all under your control. I’ve developed an entire life philosophy by that. It suits my lifestyle. I hate routine, as opposed to my wife who knows exactly what she’ll be doing in 2014”. 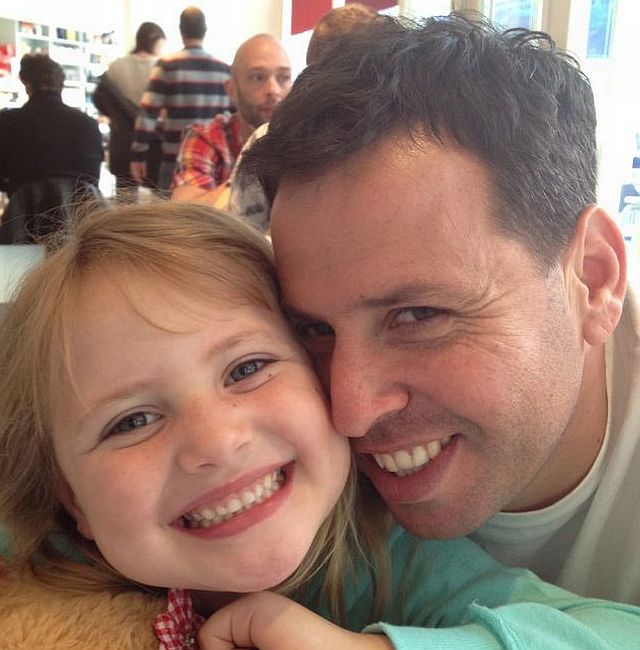 Shahaf Shabtay with his daughter, Romi

“There are no trends. There are momentums. The market demands or it’s forced. All this molecular, colorful, vegan – trends and business are bad bedfellows. People seek excitement only for short periods of time, but they’ll follow you if they believe in your product. Something succeeds, not because it’s a trend but it’s part of your narrative. There is no other success. Trends are good for gossip, to excite the neighbor. You can’t live your life by them”.

– How can one succeed as a restaurateur?

“The restaurants that “make” the most money nowadays are those that serve fast-food. The smaller they are, the less headache. The more they shift, the more money. The less time people sit down, the more the place succeeds. When you operate a restaurant, you need to constantly be setting new goals, to curse the chef and tell him you wish he had his own restaurant. The most successful restaurant is the one you’re in. When I started out in Zenzi in India, I came face-to-face with the real Asia for the first time. It wasn’t in Tokyo. There was something magical about setting up from scratch. Nowadays people open doors for me. Then, I had no idea where to begin”.

– What makes a restaurant profitable?

“There’s no such thing as a loss-maker where food is tasty. But it’s not just the food that brings the clients in. It has to WOW, even if you’re not building your business on it. For example, in Chicago they recently opened a restaurant with no kitchen. It’s all tables and they bring in take-away from the surrounding restaurants – Nouveaux, sushi, all of it top of the line. Everyone finds something they like and nobody needs to compromise. We usually go out for the company, for the joy, and that’s why the food has to be excellent; but that’s not the reason they come”.

– Did you learn of eastern concepts that do not exist in the West?

“In Singapore they have an interesting idea that in any country there are no more than five kitchens, that sell, like in a kibbutz, to 150 restaurants. All the restaurants in little India and China town  buy their half cooked food from these central kitchens and they finish cooking in the last minutes.It succeeds quite well. You buy the food you want, save on purchasing, chefs and sanitation expenses. Imagine three central kitchens in Tel Aviv with all the restaurants buying their food from them”.

– Have there been any momentous changes in the business since you began?

“The passion seems to have made way for the business side, the Excel spreadsheets and tables. The moneyman influences the restaurant. I’m against this kind of innovation. Once, you used to open a restaurant for the fun, because you enjoyed hosting. All that’s been replaced by a demanding world of reports and accountants. They should be separated”.

“I’m not a tycoon, but I am free and spontaneous. I don’t have dreams of making it rich. I’m not running after the money. I’m free to choose and I have a joie de vivre. I’m well taken care of from many aspects, and my daughter’s education is, as well”.

– The fact that a kibbutz member from Amiad – a small kibbutz not far from the Sea of Galilee – makes it is surprising. Do you think Israelis have any advantage in being Israeli?

“The Kibbutzx and the army teach us to dare; and generally, anyone who’s swam the Hatzbani River needs to be unique and is welcome to come work with us. Isra elis have unmistakable markings that anyone abroad learns to immediately identify – a body language, a style of talking, dressing. It’s a warmth in the eyes; but it can also be aggravating. I’ve found out that you either love the Israelis or hate them”.

– IN an interview to Sima Ella in 2003, you said you would return to Israel when you finished working abroad. Is this going to happen?

“I lifetime is a huge number of days. I always return to Israel. Israel is the best. Even if it raises a problem with my wife, I’ll be back in Israel in several years time. I’m still waiting for the day when I can return and use the phone at any hour and my daughter can visit a friend without it having to be just  for “‘Cup of tea’”. 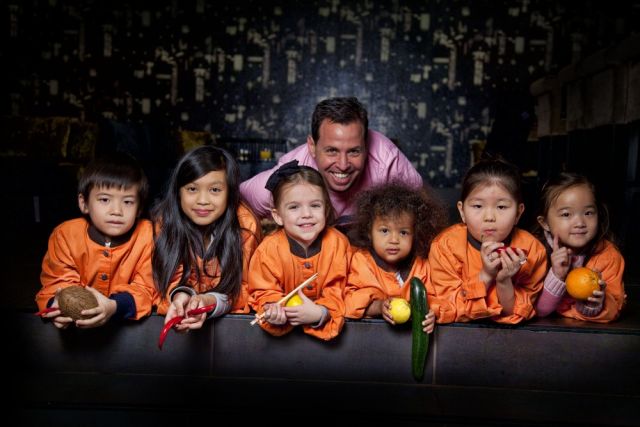