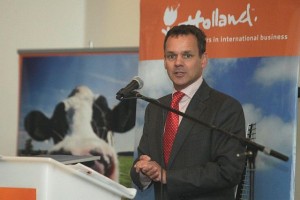 At the Make Holland Your Business conference that the Netherlands hosted in Tel Aviv, Ambassador Casper Veldkamp announced that trade between the Netherlands and Israel reached an all-time high in 2012 and exceeded the 5 billion dollar mark.

According to the information that was revealed, in 2012 the export from the Netherlands to Israel totaled 2.84 billion dollars (compared to 2.76 billion in 2011). This places Israel in 3rd place in Europe regarding Dutch export, after Germany and Italy.

In 2012, export from Israel to the Netherlands totaled 2.3 billion dollars (compared to 2.16 billion in 2011). Holland is the second largest Israeli export destination in Europe, after the United Kingdom.

The Netherlands is the sixth largest economy in the European Union, and it has one of the lowest unemployment rates in Europe (under 5%). Due to its central location and the largest port in Europe (Rotterdam), the Netherlands is considered a main player in the EU economy and the “gateway to Europe” for countries around the world.

There are many investment opportunities in the Netherlands, including the progressive agricultural sector, chemical products, energy, high-tech, the water industry and infrastructures.

The Netherlands Ambassador in Israel, Casper Veldkamp, added:  “The year 2012 was a record year for trade between Holland and Israel. Israel is a great business partner to Holland and we are proud to be Israel’s 3rd largest exporter from the EU. Let’s all work together so that 2013 will see another increase in bilateral trade, innovation and investment for the benefit of both economies”.

In this article:Netherlands, trade, Finance