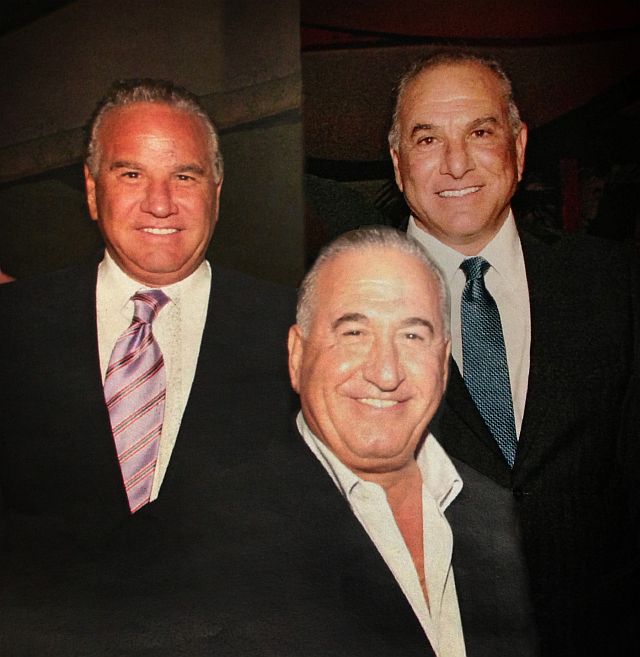 When they started, the Nakash Brothers, Joe, Ralph and Avi, did not dream of becoming real estate moguls, the facts however speak for themselves: they have become movers and shakers in the fields of real estate and hotels, and they are hot.

Their start was with a small clothing store in Brooklyn that, at the end of the seventies, grew to become Jordache Jeans, a fashion icon that took over the world for over a decade.  Nothing much, just jeans pants but with a bold and aggressive marketing campaign, rocketing the outfit into the focal point of  consumer awareness and greatly profiting the three brothers with money and acclaim.

The Nakash brothers’ investment strategy: a quarter of their earnings rerouted into the business buttressed by a private investment and a loan. Once they were ready, which happened to be in 1979, they launched an especially daring TV commercial showing a shapely blonde riding a horse in skin-tight Jordache jeans — and nothing else — galloping through the surf.  Suddenly a bare-chested young man, also in jeans, appears and vaults onto the horse, which carries the two into the sunset.  Set to a rock beat, the music on the sound track swells up, to the words: “You got the look I want to know better.”

All three commercial networks — in 1979 there were only three — rejected the spot as lewd, but the independent New York stations carried it readily, and within a few short weeks Jordache was a hit among teenage girls.

It then took the country by storm.

Jorache Jeans was now a sensational brand; the stunning Brooke Shields, at the hieght of her success, was the company’s in-house model, thus the eighties became a smashing success for the brothers.

The first cloud on the horizon appeared some time after they acquired a fifty percent stake in Guess in 1983.  The joint venture eventually devolved into a vicious and far-reaching legal brawl pitting the Nakash brothers of New York against the Marciano Brothers of Los Angeles. Mercifully, it finally ended in 1990 in a draw of sorts, a financial settlement where the Nakash brothers received an undisclosed share of 106 million dollars of profits held till then in a frozen account and the ownership of the brand name “Gasoline, ” the public however preferred “Diesel.”

The nineties saw Jordache enter a slumber, their jeans lost some of their appeal as a succession hot new players made their appearances. Alas, Jordache was relegated to the position of jeans for the middle class and it was marketed primarily through discount stores, at bargain prices.

Then Brothers read the roadmap with alacrity and decided to expand into other commercial sectors such as children wear, makeup, handbags and suitcases. Moreover, they now begun investing in real estate and banking. Concurrently, they made a move into marketing other brands, such as US Polo, Maurice Sasson, Kick-it and XOXO, as their real estate activities were accumulated assets in New York, Miami, New Jersey and Israel to the tune of $2 billion’s worth.

About a decade ago the invasion of Israel began.  Joe Nakash, who landed in New York in 1962 with $25 in his pocket took off  now with $12 million acquisition of an airline by the name of Arkiya, which they made into a major player in the discount airfare market of flights between Israel and Europe.

In 2004, the brothers purchased the Israeli AMPA Real Estate and thus began a tour de force bifurcated into purchasing existing Israeli hotels, and acquiring land for construction of new hotels and residential complexes.

In 2009 the Nakash Brothers invested $9 million in renovating and building three hotels as part of their business expansion into the hotel sector in Israel. They also invested $40 million in the addition of 130 rooms to the Park Plaza Orchid Hotel in Tel Aviv, which they own.

They also acquired an area by the seashore in the Jaffa Clock Tower Circle compound and near the mythological Andromeda Rock.

An additional $40 million have been invested in the Kineret (Sea of Galilee) Orchid Vacation Resort, which comprises of 200 holiday suites.

Another $14 million was funneled into building a 120-room & suites business hotel and vacation resort, the Country Club Orchid Hotel, at the country club compound at Glilot Junction on the road leading from Tel Aviv to Herzliya, its neighboring city to the north.

Joe Nakash, the oldest of the three, explains that the vast knowledge he and his brother Ralph have acquired about the hotel business was obtained as a result of their frequent stays in hotels around the world. He does not hide the fact that he adopts ideas ascertained by observing other operations.  Thus, if for instance he had an insight while staying at luxury hotel in Marrakesh, he would seek to implement it in their own hotels. To mention just one example, Joe determined that their guests will always be provided with free internet service.

Joe is sensible and reasoned when making decisions. He is the brother that makes final determinations, when such are necessary. He’s the boss. According to him, the harmony between the three has proven itself. “Each one of us has his own area of expertise in the company, and normally we don’t interfere with one another. There are of course important decisions that are taken after a tripartite consultation.”

“Did you notice that the economic downturn skipped us over?” Joe proudly asked me while accompanying me through the company’s Manhattan showrooms and offices. Joe, who rarely gives out interviews, prefers to operate under the radar. “We knew, Joe explains, “to spread the risk among a wide variety of products, ” they didn’t, he discloses, invest all their funds just in real estate, for instance, although they did purchased properties in Manhattan during the slump. “Which is the time to buy, ”  Joe shares.

Their shopping cart has in high-yield hotels and other improved properties, which they fist refurbish and then manage according to their agreed upon family concept. “In addition, Joe discloses, “we market products that are sold in massive quantities in large retail outlets like Wall-mart and K-mart at affordable prices. Our marketing strategy has survived even during the downturn… even made us profits.”

Of all their acquisitions, however, Joe is especially proud of their Zionist endeavors. In 2006, the brothers established an oil press – Halutza – for $2 million, a partnership with Kibbutz Revivim. It markets olive oil worldwide and owns olive tree plantations in the Negev as well as other agricultural projects worth about $3.5 million located at Ramat HaNegev, south of Beersheba. Overall, the Nakashes have invested about $5.5 million invested in olive groves, olive oil production and vineyards.

In spite of their varied and flourishing ventures, Joe takes considerable pleasure in the pries Halutza oil has won in prestigious competitions around the world. The brothers fervently believe in Zionist agriculture and are considering expanding their involvement in agricultural projects in the Negev. Among others, they are currently probing the possibility of investing in dates and almond plantations in kibbutzim located in the Ramat HaNegev area.

In May 2009, the Nakash brothers, along with real estate entrepreneur Oded Raz, purchased an office building in the old RIshon Lezion industrial zone for NIS 25 million (then about $8 million).

At the start of 2010, Orchid Hotels Management reportedly bought the Reef Hotel in Eilat from foreign investors for NIS 40 million (over $10 million in 2010 ), immediately giving it a facelift before reopening it to the public.

Additional real estate acquisitions in Israel include a tract of land along the North Sea of Galilee and the construction of a green hotel.

In June 2012, they completed their purchase of 74% of the Ma’aleh HaHamishar hotel for NIS 52 million (just under $14 million).

And so, as an interim summary, airlines may be a good and proper business, but the Nakash brothers wish to and can do more. Two months ago, their Papo Shipping Company won the exclusive rights to operate the Port of Eilat as a franchise –in a tender offer for the privatization of  the facility.

In this article:Nakash Brothers, Finance