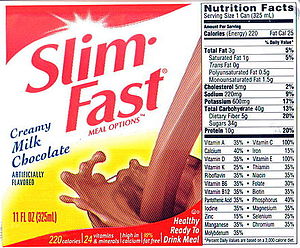 Slim-Fast is in trouble. The brand slogan: “A shake for breakfast, a shake for lunch, then a sensible dinner”, doesn’t seem to work anymore, as consumers opt for a solution that includes a real, long-term change in lifestyle. Formerly one of the most successful weight loss and nutritional food substitute company’s, Slim-Fast’s sales in the U.S. have dropped by 40 percent in the last four years, to $196 million, even though the global trend of meat replacement has grown concurrently by 27%. Having been taken out of France, the brand today represents less than one percent of Unilever’s sales. Unilever purchased Slim-Fast in 2000 for $2.4 billion.

Slim-Fast was created in 1977 by S. Daniel Abraham, a leading American pioneer and entrepreneur in the pharmaceutical and diet food business. The Slim-Fast plan was based on substituting breakfast and lunch with a slim-milk vanilla/chocolate/strawberry flavored powder mixture, complemented by a “sensible” 600 calorie dinner. Later, snacks and other supplements were added to make the diet more flexible. Sales went sky high when Tommy Lasorda, Los Angeles Dodgers managers became their spokesman, continuing to rise about 20% annually, reaching $611 million in 1999. Unilever, a London and Rotterdam based company, bought Slim-Fast, hoping to expand sales out of the U.S., which then comprised 90% of its sales, believing it could increase its revenue fivefold.

The emergence of the low-carb diets, such as Atkins and South Beach caught Slim-Fast by surprise, shattering its rosy forecast. After skyrocketing to over a billion euros in 2002, Slim-Fast sales dropped 21% in 2003. The decrease continued until 2009, when Slim-Fast received another blow, having to recall its ready-to-drink products in the U.S., suspected of bacterial contamination.

Competing companies were quick to fill the void left by Slim-Fast. Kellogg Co., the largest U.S. cereal manufacturer, launched its Special K, expanding it into a diet program, including snacks and bars, thereby increasing their sales by an average of 22% over the last five years.

Research has shown that today’s weight-watchers are looking for long-term solutions, and are therefore not just seeking weight loss, but an entire change in lifestyle, including healthier, more nutritious food and exercise. More and more consumers object to the sugar and fake flavor additives, claiming that they are at odds with today’s “healthy living” narrative. Furthermore, until this moment, Slim-Fast still has no smartphone app., and ‘if you’re not there, you’re not anywhere’.

The decline in Slim-Fast sales, making it a burden to the company, are the background to Unilever’s decision to sell off orphan products. If Unilever’s CEO Paul Polman decides to sell Slim-Fast, England’s Reckitt Benckiser Group Plc., which bought supplement maker Schiff Nutrition a year ago, for $1.4 billion, will probably be a contender.

S. Daniel Abraham is a leading Jewish American entrepreneur and pioneer in the pharmaceutical and diet food business. Abraham is also a benevolent philanthropist, donating generously to Jewish causes and the American Democratic Party. He funded Obama’s presidential campaign, established a scholarship program for Jewish graduates interested in studying Tora and a center for the promotion of peace in the Middle East.

In 1947, upon returning from Europe where he served as an infantryman in the U.S. Army, he bought a small medical company, Thompson Medical, which at that time owned only one product and made around $5000 annually. Abraham developed many new products, among them Slim-Fast, which was to become the most popular and successful weight loss company in America. Abraham sold Slim-Fast to Unilever in 2000 for $2.4 billion.

Abraham is profoundly connected and committed to the State of Israel. In 1988 he visited Israel, Egypt, Jordan and Saudi Arabia together with Wayne Owens, then Utah Congressman. The following year they founded The Center for Middle East Peace & Economic Cooperation. Abraham has been the center’s chairman since its beginning.

The Middle East conflict is a deep concern of Abraham’s. He travels to the region regularly, convinced that peace in the area is the only way for Israel to achieve security. In his efforts to help and support the peace process he has met and befriended many of the leaders of the Middle East. He has even written a book sketching his behind-the-scenes meetings with the region’s leaders.

Abraham has received honorary doctorates from Bar Ilan University, Ben-Gurion University and Yeshiva University. He lives in Palm Beach with his wife and their two children.