How [could] the young man who immigrated to Israel from Australia commit suicide in the most secure prison cell in the country? 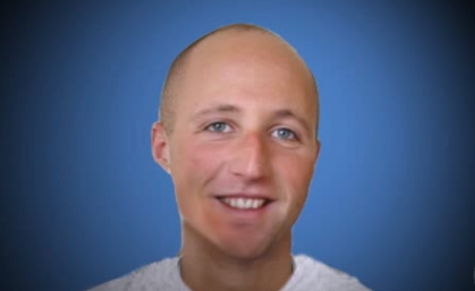 The full story about Prisoner X that Israeli state censorship attempted to suppress: Ben Zygier emigrated from Melbourne, changed his last name to Alon, got married and joined the Mossad, where he had committed “something horrendous” while performing a mission in a foreign country.  He was whisked away and incarcerated in complete isolation and without trial at Ward 15 of Ayalon Prison.  He did manage, about 18 months after his imprisonment and a short while before his 34th birthday, to commit suicide?

Ben Alon was referred to only as “X” while at the highest security ward of Ayalon Prison, where he was secreted and held till December 2010 in total isolation in a single cell (originally built for Yigal Amir, the man who murdered Prime minister Yitzchak Rabin), under maximal security, for unknown crimes he purportedly has committed.

Even the prison commanders did not know his name.  Only very few in Israel even knew about his incarceration and the mass media in Israel was prohibited from reporting about it. 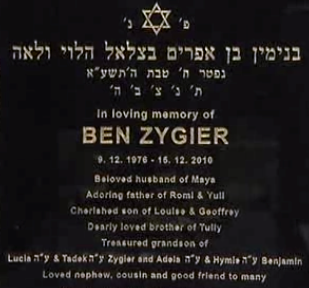 Ben Zygier, a young Australian Jew immigrated from Australia to Israel, changed his last name to Alon, represented himself as a lawyer but in fact joined and worked for the Mossad, till he got embroiled in a mysterious affair related to Israel “national security” that brought about, at the start of 2010 (or, according to the source that discussed the matter with ILUSA, maybe already in 2009, see below) his incarceration and isolation without trial in the most secure place in Israel, where he succeeded in committing suicide a year and a half after he placed behind bars – a bewildering fact that raises many questions.

Ben Alon, who killed himself a few days before his 34th birthday, he was a married man and father of two.

A reliable source in the U.S., who is familiar with the affair, told ILUSA during the last few hours a few additional details: 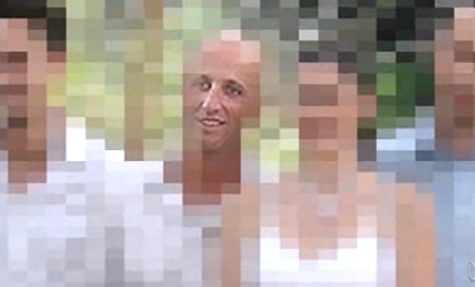 A photograph of Ben Alon during his wedding to Maya, availed by ABC Australia

These are the details unearthed through Bormann’s report:

A Storm in Israel

A storm erupted in Israel after the prime minister met with the editors of Israel’s mass media outlets for an emergency session, where the editors were instructed not to publish the secret affair for it is “very embarrassing to a state agency.”  However, pressure was brought to bear by Kneset [Israel parliament] members forced the Minister of Justice to utter a statement that, “the matter requires an examination.”

Background:  If indeed this is a matter of treason and counter-espionage, it is not the first such case in the annals of Israel intelligence community.  Thirteen years after the creation of Israel, in 1961, Israel Bar, who served as the head of operations of the IDF during the 1948 war and was considered intimate with the heads of the defense/security apparatus of Israel, was exposed as a soviet spy of many years.

In 1991 Shimon Levinson, an IDF colonel, a Mossad man and the security officer of the prime minister’s office was exposed as a soviet spy, as well.

Likewise, the scientist Marcus Klinberg, conveyed to the Russians all secrets of the biological and chemical research conducted at the Nes Tziona Institute, where he served as deputy director general.  (Klinberg served a 16 years prison term for spying.)

And of course there is Mordechai Va’anunu, a technician working at the nuclear reactor in Dimona, provided in 1986 Israel’s nuclear secrets to a British newspaper.

Another well known case is that of Mossad man, Yehuda Gur, who provided his handlers with false information.

http://www.israelilifeusa.com/israel/2597, an Internet-based newspaper published in the U.S. in Hebrew that is aimed at the large Israel community abroad published on February 12, 2013 some fascinating details about the espionage affair that has gripped attention the world over.

Our Internet based newspaper: jbusinessnews.com is about to publish a link to a report published in the U.S. (A faithful translation of the report into English)

In this article:Mossad, spy, Australia, Finance