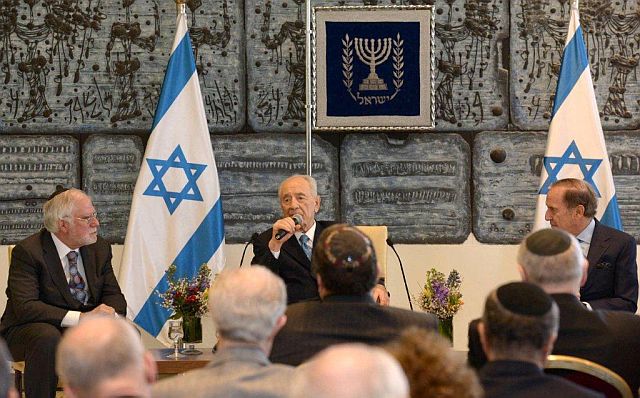 “President Obama is serious that the United States has to prevent Iran from becoming a nuclear power, not just because of Israel, but for the safety and security of our times, ” President Shimon Peres told a delegation from the Conference of Presidents of Major American Jewish Organizations, when hosting them at his Jerusalem residence on February 11.

Welcoming the delegation Peres said, “It’s a pleasure to see you here in Jerusalem at such a meaningful time. We are now trying to build a government and decide on the new agenda, and of course anticipating the visit of President Obama.”

“The real problems in the Middle East are starvation, unemployment and lack of dignity. We have to defend our own island under those circumstances and to see if we can be of any help to calm the sea.  We are interested in seeing the Arab world in a better situation, finding answers to poverty and discrimination, ” the president added.

Peres addressed the possibilities for progress in peace talks and said, “We must really try to make peace wherever we can and immediately, I believe we can move forward with the Palestinians because none of us would like to be victims of the terror organizations, Hamas and Hezbollah, or Iran.”

Relating to the ongoing coalition negotiations, Peres said “I held consultations with the representatives of all the parties and the candidates themselves spoke about three main issues; the danger of Iran, the diplomatic process with the Palestinians and equality internally. I hope that a government can be formed as quickly as possible.”

The former chairperson of the Conference of Presidents, Mort Zuckerman, greeted Peres on behalf of the delegation and said, “This conference has been coming to Israel for 39 years and he has been here in one capacity or another for all those years. Shimon Peres is a wonderful symbol for all we think of when we think of Israel and the Jewish people.”

In this article:Shimon Peres, Jerusalem, Finance