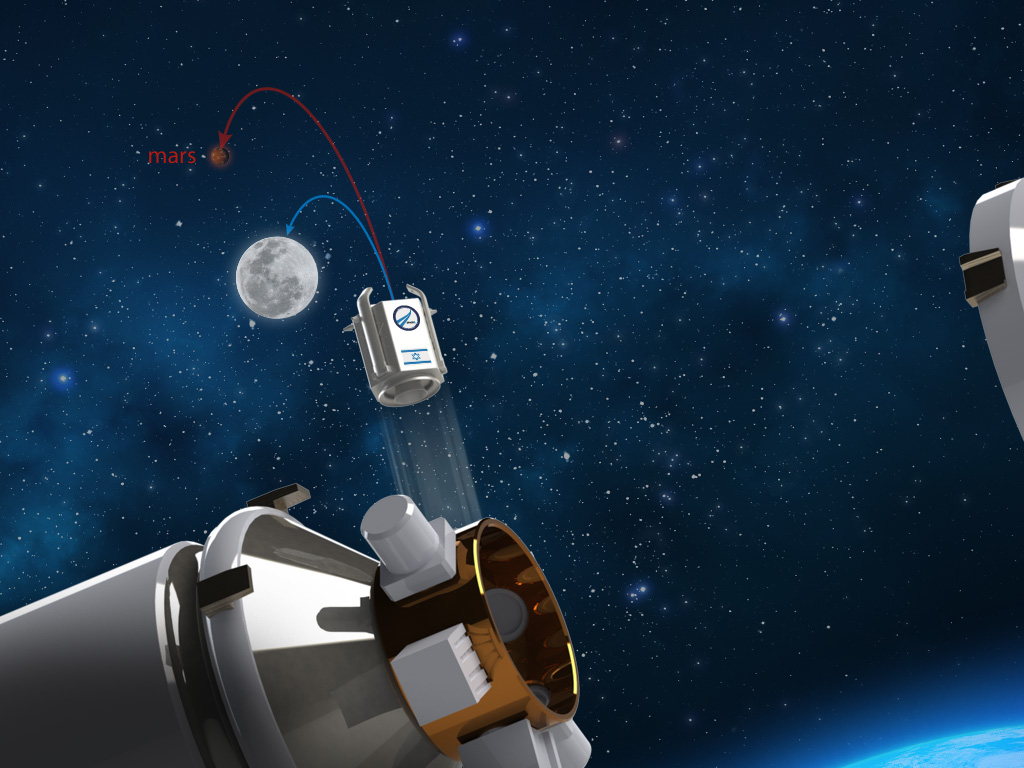 Illustration : The way to the moon

It usually takes a war to unite Israelis; however the start-up nation has recently gathered around an exciting innovative project, which has captured the hearts and minds of many Israelis, from leading scientists to high school students.

The project, called SpaceIL, aims at launching a spacecraft capable of landing on the moon and jumping 500 meters. The mission’s deadline is 2015, according to the criteria of a global Google contest — “The Google Lunar X Prize”. The first group that accomplishes the mission will win a 20 million dollar prize.

Israel has a new opportunity to demonstrate its capabilities in science and improvisation; the ability to come up with innovative solutions to theoretical issues, and above all, the urge to scale new scientific peaks.

It all started back in 2007, when Google first announced the global competition. A few dozen teams registered. Some of them were international groups, but most represented advanced nations such as USA, Canada, Great Britain, Australia, China, Italy and Japan.

Now only 25 teams remain in the race. The American team decided to quit and join forces with the Israeli SpaceIL team. The Israelis themselves joined at the last minute, just before the last registration date on December 31, 2010.

How did the Israeli race to space begin? Three young engineers, Yariv Bash, Kfir Damari and Yonatan Winetraub were hanging out in a bar in Holon on a winter night in late 2010, when they decided to put their personal careers on hold for the sake of a national goal: winning the Lunar X prize. In addition the main objectives, the competition requires that the small spacecraft carry the Israeli flag and transmit video broadcast to earth. In addition to the scientific challenges, the project will also have to meet strict private funding criteria. 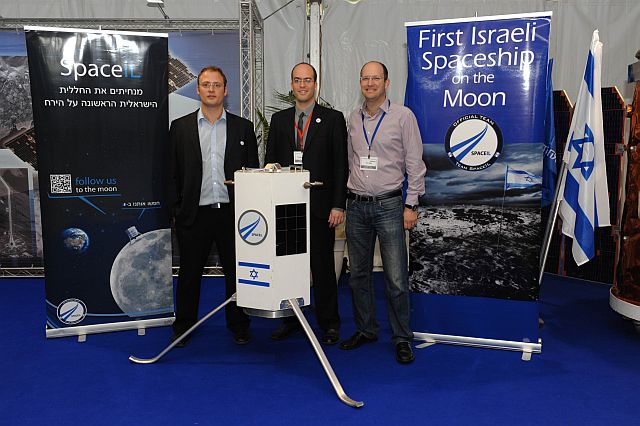 The three engineers set up the SpaceIL association, with Bash serving as CEO, which focuses not only on the competition, but on broader national educational objectives. The non-profit organization believes that the image of the Israeli flag on the moon will excite young Israelis and draw them to space science and related scientific studies.

The team has enlisted Israel Aerospace Industries (IAI), as well as senior space scientists from the Weizman Institute, top physicists and aviation engineers, who have all joined together in the national mission. The project was launched on December 2011 in the presence of President Shimon Peres and Rona Ramon, the wife of Ilan Ramon, the Israeli astronaut, who died in the Columbia space shuttle accident in 2003. The ceremony, held at the IAI complex near Ben-Gurion Airport, unveiled the first Israeli spacecraft and President Peres was presented with a ticket to the first Israeli flight to the moon.

The project’s main backer is businessman, Morris Kahn, who has invested approximately half a million dollars in the project. Kahn has also undertaken to fund half of the launching cost, estimated at a few million dollars.

SpaceIL recently concluded a successful preliminary design review with the main parties participating in the planning and building of the spacecraft, with IAI being the most prominent. The review is an important landmark needed to move from the initial planning stage via the detailed planning stage, to the hardware and component acquisition stage and finally the actual construction that will be carried out at IAI.

SpaceIL divulged details about the moon flight and the unique technologies that will be integrated into the Israeli spacecraft, which is going to be the smallest spacecraft ever to land on the moon. To cut costs, the SpaceIL spacecraft will “hitchhike” on a foreign space company’s satellite launch. Unlike hitching a free ride, the cost of joining such a launch is millions of shekels. 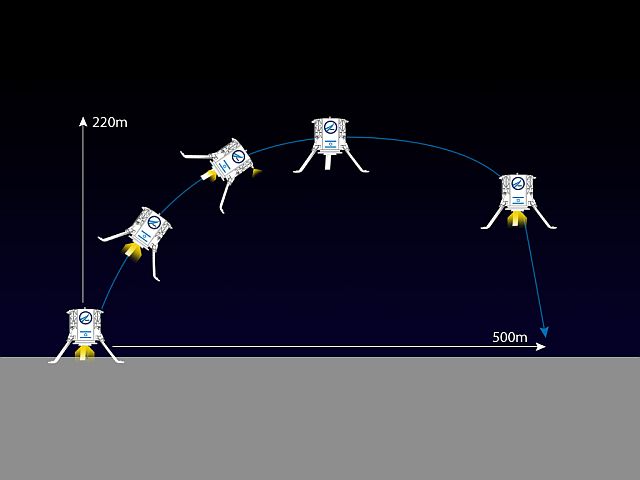 Jump on the moon

On exit from the atmosphere, control of the spacecraft will revert to earth and orbit corrections will be made. At this point even the smallest mistake could prevent the spacecraft from ever reaching the moon, or conversely, make it crash into it. The trip to the moon is expected to take one month then the spacecraft will settle into an orbit 100 kilometers from the moon.

At the opportune moment, the descent to the moon will begin. Once the spacecraft enters the moon’s gravity it will go into a holding pattern for up to two weeks ahead of landing.

The SpaceIL team had to find and create special navigation systems and orbit correction solutions in order to maintain the spacecraft’s flight path, such as Earth Moon Sensor: A unique development of an optical sensor with a camera and photo processor that will take pictures of earth and the moon so that the spacecraft can position itself in relation to both.

Another original tool is OpNav: An optical navigation system. A third navigation technology that the spacecraft will utilize is a Star tracker, a camera connected with a processor that contains a digital map of the stars in space. By comparing the picture it takes with the picture in the memory, the tracker can pinpoint the spacecraft’s location.

Landing on the moon will be gradual:

The most dramatic and critical stage of the whole mission is landing. In order to minimize possible problems, SpaceIL has developed a number of technological innovations. 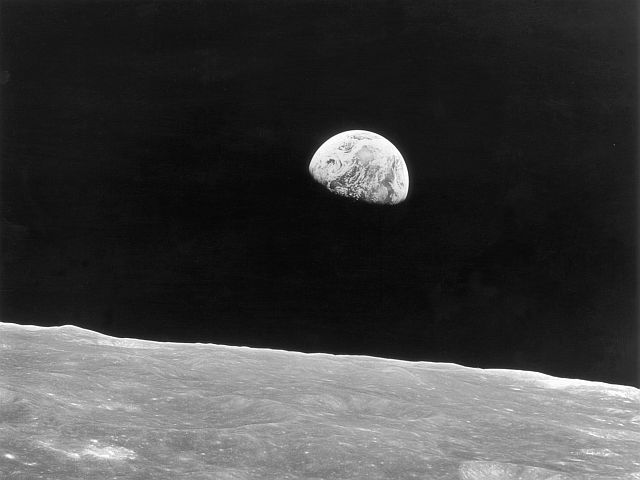 Earth rises above the horizon of the moon/ Getty

One of the original developments is SLAM – Simultaneous Localization Mapping – an algorithm for self-location during landing. SLAM is meant to provide a solution to the difficulty to precisely position and time contact with the ground.

Another means the spacecraft will utilize is IMU – Inertial Measurement Unit. It is a sensor that measures an object’s position in space without an external reference system. By analogy, thanks to the IMU, the spacecraft is like a blind person who knows exactly how his body is positioned solely on the basis of internal sensors. Actually, every smart phone today has such a sensor.

The SpaceIL landing is carefully timed to coincide with sunrise on the moon due to the temperature, which gradually rises beginning from sunrise. Since there is a danger that the fuel tanks will explode when the temperature reaches 50°, the goal is to buy as much time as possible at a relatively low temperature that does not jeopardize the spacecraft. According to current planning the temperature should reach 50° on the third day after landing, and the mission must be completed by that time.

Furthermore, at sunrise the sun shines from the side. This could help identify obstacles on the ground because, as the saying goes: “Even the smallest stone casts a big shadow.”

Since the spacecraft is unmanned and is going to land automatically, the crew needs a substitute for human eyes in order find an area free of rocks, craters and relatively level, so that the spacecraft won’t not fall on its side. The leader of the team developing the system is a physician specializing in brain control processes, and is in fact giving the spacecraft a human attributes.

One of the contest requirements is live broadcast of HD quality video images from the spacecraft back to earth. The telecom company Bezeq will extend optical fibers from the antenna farm that receives the wireless signal coming from the moon to the control center so that information flows as fast as possible. Bezeq is also going to support a hookup to the other reception stations in the world that will enable the especially rapid broadcast that is necessary for the mission’s success.

At this point, it is becoming hard to believe that this whole journey began in a cold winter night out in a bar in Holon. Now it appears that the Israeli race to space, that started with small steps, may lead to a big step towards the pinnacle of international space science. 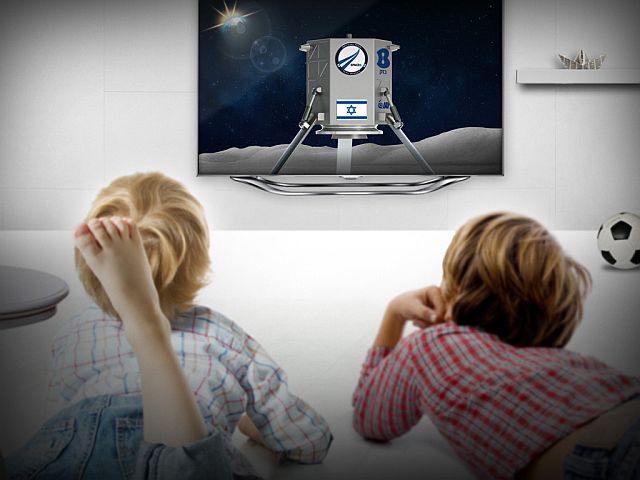 In this article:Israel, Moon, SpaceIL, Finance