The KitLocate company has recently won $25, 000 plus mentoring in an innovation contest sponsored by MasterCard and the Israel Advanced Technology Industries (IATI) organization. KitLocate CEO, Omri Moran, states, “We aspire to be leaders in the field of user location-based services.” 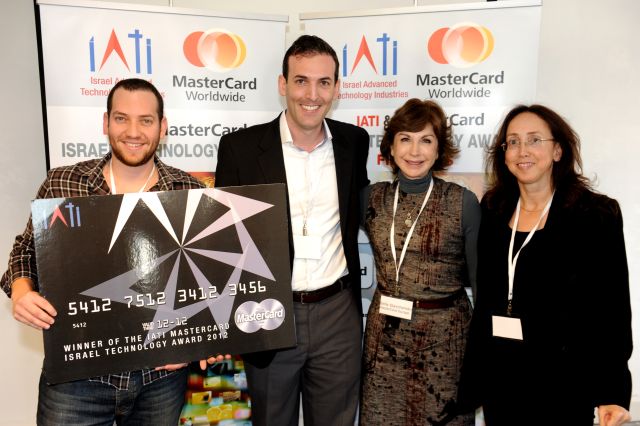 KitLocate, a start-up company, recently won the Israel Advanced Technology Industries (IATI) and MasterCard $25, 000 Israel Technology Award. The company has developed technology, which enables various applications and services to obtain information on the location of online users of smartphones  in order to allow businesses to recommend relevant products to the user as well as additional benefits.

Winning second place was KidsCash, an online money management system for children and their parents. This enables parents to budget their children’s internet purchases by creating a virtual savings account where parents can deposit a child’s allowance, which can then be used for purchases in specific stores approved by the parents.

In third place was SellInApp, an application enabling the online purchase of additional related goods.

In addition to the $25, 000, the winning company was also accepted into the Junction program, where it receives three months of support and mentoring from an accelerator team. The Junction is a community of graduates with over 120 initiators who are in partnership with over 50 technology companies. By participating in the acceleration program, the company gains accessibility to initiators like themselves who have been through the process, as well as potential partners.

KitLocate was founded in October 2011 by four partners. Work on the project began almost two years ago. Investments received to date stand at only a few tens of thousands of dollars. This is due to the fact that the partners have used their own resources instead of acquiring outside knowledge. The four partners are Omri Moran, Ron Miller, Yoav Kafri and Hadar Dubin.

Omri Moran serves as the company director. He is 26 years old, single and lives in Beersheba. The majority of his work experience was gained in the army where he served first as a flight inspector and then as the control tower commander at the Nevatim base. “From my army service I have a little experience at management of personnel, projects and budgets, ” he says. “I established this project during my studies, together with Ron and Yoav.”

Ron Miller, 27 years old, lives in Herzliya and is also single. Ron is a graduate of an army technological intelligence unit. After finishing his service, Ron went to work for the DataSec Company as a consultant for information security. He studied electronic engineering at Tel Aviv University and finished his degree with distinction. While completing his degree, he worked at Intel as an engineer in the validation department.

Yoav Kafri, 27 years old and single, is also a Beersheba resident. He is a graduate of the IDF computer division of the Israeli Defense Forces (IDF) and served in a special technological unit. While still in the army, he successfully completed a degree in computer science from the Open University. After his release from the army, he went to work in the United States for a 23-branch network of stores called SurfStyl, where he filled the position of Manager of the IT department. On his return to Israel, Yoav founded the KitLocate with his friends.

In addition to the founders, Hadar Dubin, 27, is also one of the partners. He, too, lives in Beersheba. In addition to working, Hadar is studying for a degree in electronic engineering at Ben-Gurion University.

According to Omri Moran, it is common knowledge that when you monitor the location of an online user, the battery runs out very fast. “However, the rate of the depletion of the battery is also very dependent on the exact sample location, ” he notes. “Our solution is to optimize between the requirements of accuracy and the needs of the battery. The three main advantages of our solution is as follows:

“Our application runs on iPhone or android, in the background, 24/7, and by neutralizing the high resolution location of the user it is very economical with the battery — so much so that the user will not notice it. Our solution also enables every client to carry out location optimization for his level of business. For example, there are those who have no interest when a client enters a certain place, but want to know when he leaves. That is hard to realize using existing tools. Our integration is very simple. With one line of code, we can set up our solution.

“This enables very substantial savings during development and in resources, in addition to additional savings in cutting out the need for debugging checks. Location checks are the most complicated of tests as they need to be carried out physically. One needs to go out of the house, enter the car and begin to travel in order to check out many instances.”

In response to a question about the effectiveness of the mentoring in the accelerator program, Moran explains: “We are now at the moment of acceleration at the junction, led by Eden Shochat of Genesis. Until now, there has not been one obstacle that we have hit, for  which we didn’t receive a real honest suggestion. And in every direction that we wanted to go, doors were opened up for us in the industry. We hope that they will continue to help us as they have helped so far. We don’t need more than that.”

Moran indicates that the company aspires to be a leader in the field of location, emphasizing business benefits on one hand and enhancing the standard of living of its users on the other hand.

In answer to the question whether being Israeli is an advantage and whether having served in the IDF is good preparation for the hi-tech field, Moran says that there are both advantages and disadvantages. “The experience that each one of us gained in the area of our activity in the army apparently places us years ahead compared to other countries, which is of course a great advantage. It is doubly valid when we are talking about the ability to develop programming. But, in the end, the real breakthrough came from thinking outside of the box. In my opinion, this type of thinking is eroded over the years and that is why it is an advantage to be a young initiator with deep technological abilities.

“The disadvantage of being Israeli is that you are far from the target marketplace in two senses — physical and mental. It is a lot harder to develop business ties without attending conferences or meetings and there is even difficulty in coordinating telephone calls due to the time differences. It is also hard for us to think like an American or a European — the customers, ” adds Moran.

Over 40 Companies Took Part in the Competition

The Innovation Competition of MasterCard and IATI was launched in September 2012 and was open to Israeli initiators who were in the first stages of research and development of products and solutions in the field of electronic payments. Over 40 companies entered the competition and 10 were invited to present their projects at the final stage that took place at the end of December in the presence of leading business people.

Daniel Cohen, MasterCard Israel Country Manager, commented that, “The large number of competitors and the quality of the entries proves that there are significant, creative developments in financial technology products in Israel.”  MasterCard’s vision is “a world without cash.”

“The products that the participating companies developed in the competition advance the implementation of this vision, whether through technological developments that support the various payment processes or through the development of consumer and business services that are aided through the use of such payments. MasterCard supports technological innovation through integral development whether at the MasterCard Labs in Ireland where the next generation of products for the company are being developed or by the joining up with complementary technological companies, including also relatively young Israeli companies like those who took part in the competition.”

Karin Mayer Rubinstein, the director of the Israel Advanced Technology Industries added, “This initiative is one of the many activities that Israeli hi-tech industries do through the organization in order to nurture ‘soft’ start-ups and to continue to prepare the ground for the flowering of the new Israeli start-ups, among them those in the growing field of payments. Potential growth of the Israeli industry is filled with our abilities to use our multitude of experience from our successes and our failures and to endow the young companies and the young initiators, among others through initiatives like that of MasterCard so that they can establish the next Mellanox.”

MasterCard is active in Israel through the leading banks and credit companies: IsraCard, Leumi Card, C.A.L. And the Postal Bank. The card is an international credit card that enables the clients to enjoy a new, comfortable and leading high level service which can be used around the world.

The IATI organization serves as an umbrella organization for the hi-tech industry, venture capitalists and Israeli life sciences. It is for individuals and companies in the scientific fields who are connected to research, development and marketing such as those in hardware, programs, internet, communications, bio-pharm and medical equipment.

The organization initiates and aids in the development of policy and activities in order to advance the hi-tech industries and the life sciences in Israel. It advances topics together with governmental authorities such as the creation of cooperation between the members of the organization, the advancement of innovation and technology and the creation of business ties between Israel and the world.

IATI is the largest umbrella organization in Israel which represents over 300 companies and organizations representing all aspects of Israeli industry — hi-tech, life sciences, venture capital, start-ups, technological incubators, commercial companies and service providers that employs hundreds of thousands of hi-tech and life science employees in Israel.