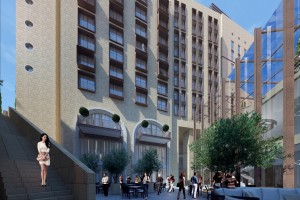 Developers are chipping away at Jerusalem’s hotel-room shortage with the latest addition being the start of construction of a new luxury hotel in the exclusive German Colony neighborhood by the Isrotel Hotels chain.

The hotel is the company’s first in the capital and will be part of its “Exclusive Collection.” The five-star hotel, located on the corner of Emek Refaim and Derech Bet Lechem Streets, requires an investment of NIS 450 million, including about NIS 260 million of construction costs.

The 250-room facility will feature restaurants, a spa, swimming pool, fitness room, parking, and a business center with a luxurious conference hall and meeting rooms. It is being built on 5.6 dunams in a style that blends in with the surrounding residential area, incorporating two historical buildings from Templar settlement times. The hotel is scheduled to open in 2015.

“I welcome the decision by the Isrotel Hotels chain to build a new hotel in Jerusalem, ” said Tourism Minister Stas Misezhnikov. “More than 80% of all tourists coming to Israel visit Jerusalem so the increase in hotel-room supply and the addition of new hotel rooms is essential, given the ministry’s target of 5 million tourists by 2015.”

The JerusalemMunicipality and the Jerusalem Development Authority (JDA), with the support of the Tourism Ministry and the Prime Minister’s Office, have been working to realize the hotel potential in several key areas of the city. Construction of the Isrotel hotel is part of the momentum in Jerusalem that includes the 240-room Waldorf Astoria Hotel scheduled to open in March 2013 and the redevelopment of the 153-room Jerusalem Pearl Hotel opposite the Jaffa Gate.

Because it is the country’s most-visited city, Jerusalem is eligible for significant financial support from the Tourism Ministry, with a unique grant of up to 28% of the total investment for entrepreneurs. In 2012, the ministry approved grants totaling NIS 450 million for the construction of six new hotels and the conversion of four existing buildings into hotels in the city, including the new Isrotel hotel. 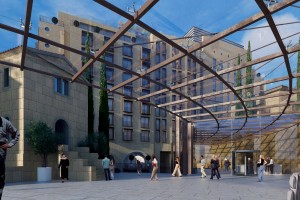 The municipality and JDA have established a “Green Channel” that removes bureaucratic obstacles and offers every entrepreneur interested in building hotels in the city a fast and professional track in which they receive assistance from a dedicated project manager who accompanies them throughout the entire process.

“The massive promotion of the hotel industry in Jerusalem is a significant part of the strategy to promote Jerusalem as an international tourism destination, ” said JDA Chairman Moshe Leon. “In recent years, there has been a significant increase in the number of tourists staying in the city so we are working to ensure that the available hotel supply is the best it can be for every tourist.”

The Lewis family, the owners of Isrotel, headed by Julian Lewis, son of the late founder David Lewis, came to Israel from London to participate in the January 29 cornerstone-laying of the new hotel. Misezhnikov, Jerusalem Mayor Nir Barkat and Leon also took part in the ceremony.

“Construction of the new Jerusalem hotel is in line with our business strategy of growth and increasing the number of hotel rooms under Isrotel Hotels ownership and management, as well as expanding into additional tourist areas in Israel, ” said Lior Raviv, general manager of Isrotel Hotels.

Isrotel owns and operates 15 hotels in Israel including the RoyalBeach, Agamim and RoyalGarden in Eilat; Isrotel Dead Sea; Breishit in Mitzpe Ramon; and the Carmel Spa, in the CarmelForest. Another five-star hotel, the Royal Beach Tel Aviv is expected to open in May.

Other hotel developments planned for Jerusalem include a complex due to be marketed in the second quarter of 2013 that will include 1, 200 hotel rooms, while Nitsba recently won the tender to build a new hotel at the former site of the Foreign Ministry at the entrance to the city. In addition, IBIS, the international hotel chain owned by Accor Hotels, has entered Israel to manage two hotels in Jerusalem now under construction with a total of 230 rooms. The Atlas Hotel chain is expanding its management of hotels in the capital with the inclusion of the 55-room Arthur Hotel, which is about to open, and another hotel under construction

In this article:luxury hotel, Jerusalem, Finance