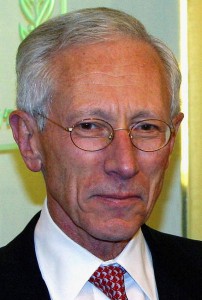 Bank of Israel Governor Stanley Fischer, who yesterday notified Prime Minister Binyamin Netanyahu he would step down in June, said today the main goals he set for himself when he assumed the post eight years ago have been achieved in full.

“We legislated the Bank of Israel Law, we signed a wage agreement, we carried out a reorganization, and obviously we managed monetary policy for the good of the economy and population, while maintaining price stability and financial stability, ” Fischer said today at a press conference in Jerusalem. “I will leave the Bank of Israel with it in very good condition.”

A former economics professor at MIT, Fischer, 69, also has served as Vice President Development Economics and Chief Economist of the World Bank, First Deputy Managing Director of the International Monetary Fund (IMF) and Vice Chairman of Citigroup. He assumed the position of central bank governor on May 1, 2005, on the recommendation of then Finance Minister Netanyahu, and was re-appointed for a second five-year term in May 2010.

His policies have been credited with helping Israel rebound from the global financial crisis quicker than most economies. He received an “A” rating on the Central Banker Report Card published by Global Finance magazine in 2009, 2010, 2011 and 2012.

“I leave the economy in good shape, with serious challenges, ” Fischer said. “First and foremost, a budget needs to be passed, which will be a basis for macroeconomic stability, with a limited deficit at a reasonable level.”

The economy also must deal with the challenge of bureaucracy, he said, noting that in recent years, Israel’s ranking in international surveys, such as the World Bank’s Doing Business survey, indicates a decline in status relative to other countries.

“This is a worrying fact. It is very difficult to deal with these problems which are related to the decision making system in the economy, ” Fischer said, noting that home prices pose an additional challenge. “The Bank of Israel, the Ministry of Finance, and the government will need to continue to deal with this problem — the Bank of Israel can do things on the demand side, but it is more important that the government take steps to increase supply, because these steps both reduce prices and lead to more homes in the economy.”

Fischer said the decision to leave was “personal” and that he knew if the resignation had been announced before the Jan. 22 elections, it would have been considered political but that is not the case. He decided to remain until June 30 only because Netanyahu asked him to stay until the budget is approved by the new government, he said.

Fischer, who moved to Israel when he became Governor, said he and his wife Rhoda will return to the U.S. when he leaves office but that at some point in the future they likely would divide their time between the two countries.

“I do not have plans for the future and I do not have a position waiting for me, ” Fischer said. “I hope and intend to continue to be involved in public life in Israel, and hope that my voice will continue to be heard in the public discourse. Israel is my second home, and I am not sure if the second is less of a home than the first.”

In this article:Bank of Israel, Stanley Fischer, Finance