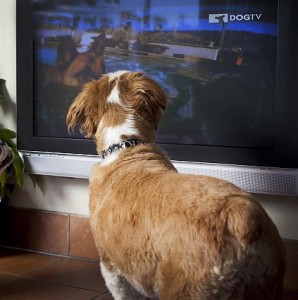 DogTV, the first television channel for dogs, was launched in Israel last week, a year after its inauguration in California. By the end of 2013 it is expected to expand its U.S. exposure from Cox Cable and Time Warner to feature on leading U.S. broadcast networks.

The channel aims to meet that basic need of dogs – company.  Every dog ​​owner has experienced the sense of sorrow and heartache felt when leaving his canine companion alone at home for hours on end. Dogs in the wild live in herds; at home, they need company. At times, the effect of loneliness is so hard on a dog it responds with a separation anxiety attack or depression.

Leading animal organizations around the world (HSUS, ASPCA and others) recommend dog owners keep a radio or television on because they are effective in reducing various forms of stress and anxiety that afflict pets by making them feel less alone and less scared of strange noises.

Television channels have become viewable to dogs mainly because the new types of television screens allow dogs to see what flashes on them just as is experienced by humans – something that was not possible previously.

“Dogs need to experience belonging and have company. The relationship between dogs and humans is that of dependency, ” said Yossi Uzrad, president of Jasmine Group, the  “Dog owners respond to their pets in the same emotional way. For instance, they feel guilty when they leave their dog alone at home.”

Fish and parrots also react to sound and picture, according to Uzrad, though cats don’t really have the need to watch TV.

“Unlike dogs, cats don’t suffer from anxiety when left alone at home.  For them, the presence of humans is not as significantly meaningful or dramatic as it is for dogs, ” said Uzrad. “Cats aren’t (emotionally) dependent on humans. They can remain alone in the house for many days as long as they are provided with food and water.”

The broadcasting schedule for our our “best friends” consists of short three to six minute programs, which together provide hours of programing geared toward dogs’ natural mode of activity. There are three main types of programming:

• Relaxation – These programs are designed to induce rest and include classical music, nature sounds, landscapes and nature photography and, of course, sleeping dogs.

• Exposure – “Educational” programming designed to minimize fear reactions to the various types of noise a domestic dog encounters in its daily life such as vacuum cleaners, elevators, thunder, knocks on the door.

More about the pet markets in the U.S. and Israel

View a video sample of a TV show for dogs

More about the science behind DogTV