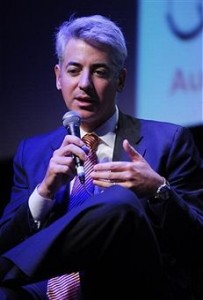 It was at last December’s Sohn Conference – an investors’ forum run by the Sohn Foundation which is dedicated to the treatment and cure of pediatric cancer – that Bill Ackman struck. He came well prepared for his unprecedented attack. Ackman began by showing a Herbalife promotional video, promising millions to the company’s distributors. Pershing Square analyst, Shane Dinneen then pointed out that most distributors of Herbalife (93%) gain zero compensation and therefore actually lose money.
According to Ackman, money is made not through retail sales of Herbalife products, but through the recruitment of additional distributors, all of whom pay a commission to their recruiter. He accused Herbalife of targeting the financially vulnerable and unsophisticated, like housewives and minorities. He called Herbalife a “pyramid scheme” and bet a billion dollars that its stock would fall to zero. In a show of confidence, Ackman himself bet heavily against Herbalife, selling short $20 million shares (about 82% of the company’s shares currently on loan to short sellers) and announced that all forthcoming profits from Herbalife would be donated to charity.

Herbalife, a 32-year-old company, has a network of 3.2 million salespeople in 87 countries. “What they really sell, ” Ackman claimed, “and what their distributors make money from, is selling a business opportunity; and the business opportunity is to sell that same business opportunity to your friends, who in turn sell it to their friends.”
“We don’t believe”, he added, “that there is any demand for the product by true retail consumers at the suggested retail price” (CNNMoney, January 11, 2013).
Ackman has set up a new website devoted to his fight against Herbalife. ’His goal is to bring about the closure of Herbalife by the US Federal Trade Commission, based on his research. Herbalife, a multi-level marketing company, with around $4 billion in annual sales, vows to fight back. To date, the company has released a short press release, calling Ackman’s accusations “without merit”, “distorted, outdated and inaccurate”. Michael Johnson, Herbalife Chief Executive Officer, promises to respond to, what he calls, Ackman’s “crusade” merely “another attempt to illegally manipulate the market by overzealous short-sellers.”
Herbalife’s stock dropped 35% following Ackman’s presentation but has since risen to just 14% below their worth before. Analysts are sticking by the company, claiming that there is nothing new in Ackman’s allegations and that there is nothing illegal in the firm’s multi-level marketing practices.
This is not Ackman’s first battle with a giant trading corporation. MBIA is a holding company whose subsidiaries provide financial guarantee insurance, fixed-income asset management and other specialized financial services. In 2002, Ackman challenged the company’s AAA rating, calling for a division between MBIA’s bond insurers structured finance business and their municipal bond insurance side. He bought credit default swaps against MBIA corporate debt as a way to bet that it would crash; and when it did, he sold the swaps for a large profit. Bloomberg News reporter, Christine Richard’s Confidence Game, (Wiley, 2010) tells the story of Ackman’s battle with MBIA.
The weeks ahead should be interesting; but as the battle rages on, it still seems early to pick a winner.

Who is Bill Ackman?