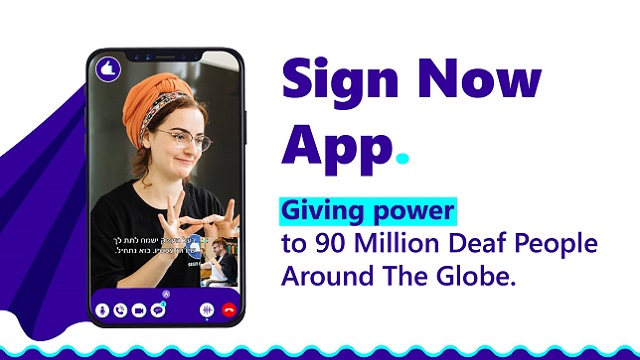 Sign Now is an Israeli start-up that specializes in on-demand sign language translation for the deaf community – anywhere and anytime. Its app allows deaf people from different countries to communicate with one another. And the Israeli company is even helping Palestinians in Gaza.

Each sign language has its own unique structure, grammar, explains WFD, and lexicon, and sign languages are equal to spoken languages in every way. Numerous studies have shown that sign language supports the development of brain function and social skills. And this is where Sign Now comes into the picture.

Founded in 2019 by Tomer Levy, Sign Now says that its app has already helped 10s of thousands of deaf to communicate with people who do not speak their languages.

The Sign Now app is a service-based technology that connects the deaf community and sign language interpreters. It offers a variety of video call options including call-back, on-demand, and pre-scheduled calls, all with minimum clicks involved. And the highlight – it is free for the deaf community with our B2B & B2G business models.

The Sign Now app was even used recently to help deaf Arabs in Gaza communicate with deaf people who don’t speak Arabic.

During Israel’s most recent operation against terrorists based in the Gaza Strip, Operation Breaking Dawn, Sign Now says that its tech helped 20 Gazans to communicate with the outside world and keep in touch with people and get updated and what was happening.

“We don’t get involved in politics. We’re here to lead a social revolution,” Tomer Levy, Sign Now’s founder and CEO told Fox News. “Our goal is to help the hard of hearing to integrate in the best possible way in today’s world. When a hearing person speaks with a sign language interpreter, he pays much more attention to the person in front of him.”

Sign Now has also been helping Russian speaking Israelis who are deaf keep in touch with relatives and loved ones in Ukraine since the start of the Russian invasion of that country back in March.

“They (Ukrainians in Israel) were able to talk to their family and friends, get medical advice and even arrange their travel from Ukraine to Israel and other places,” Levy told Fox.