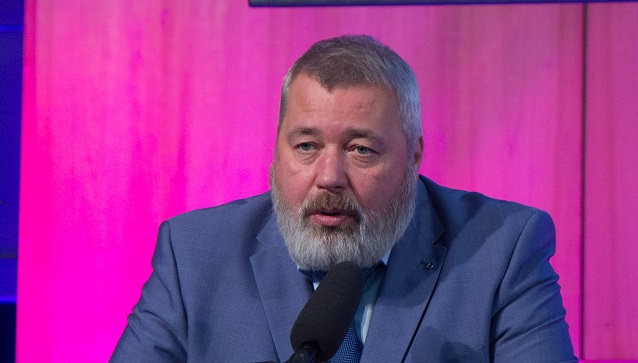 Russian journalist Dmitry Muratov auctioned off his Nobel Prize to raise money for the people of Ukraine suffering under a now three month long Russian invasion of their country. At auction on Monday night, the 23-karat gold Nobel medal sold for $103.5 million, crushing the previous record for the sale of a Nobel Prize.

In 2014, the Nobel medal that belonged to James Watson who won it for the discovery of the double-helix structure of DNA sold for $4.1 million. That is an increase of almost 300%.

The money raised will go to UNICEF to aid Ukrainian children and their families who have become refugees. The buyer was not identified.

Before the auction Dmitry Muratov told those in attendance from the stage, “We hope that this will serve as an example for other people like a flash mob, for other people to auction their valuable possessions, their heirlooms, to help refugees, Ukrainian refugees around the world.”

“I was hoping that there was going to be an enormous amount of solidarity, but I was not expecting this to be such a huge amount,” Dmitry Muratov told AP after the auction.

Born in 1960 in Kubyshev, USSR (now Samara, Russia), Dmitry Muratov was awarded the Nobel Peace Prize in 2021 “for their efforts to safeguard freedom of expression, which is a precondition for democracy and lasting peace.” He shared the prize that year with one other person, but he still got his own medal to keep.

According to his bio on the Nobel Prize website, Dmitry Muratov started out as a journalist for Soviet newspapers. After the dissolution of the Soviet Union in 1991, he and other journalists co-founded the newspaper Novaya Gazeta, which soon became a leading advocate for democracy and freedom of expression in Russia. The Soviet Union’s last leader and the 1990 Nobel Peace Prize laureate, Mikhail Gorbachev, supported the newspaper financially and became co-owner in 2006. Mr Muratov has been editor-in-chief for most years since 1995.

Under Dmitry Muratov’s leadership, Novaya Gazeta has criticized the Russian authorities for corruption, electoral fraud and human rights violations. Six of the newspaper’s journalists have been murdered because they wrote critical articles on Russian military operations in Chechnya and the Caucasus. The best known of them is Anna Politkovskaya. As editor-in-chief Mr. Muratov has on several occasions criticized Russia’s annexation of Crimea in 2014 and the government’s use of military force, both in and outside Russia.