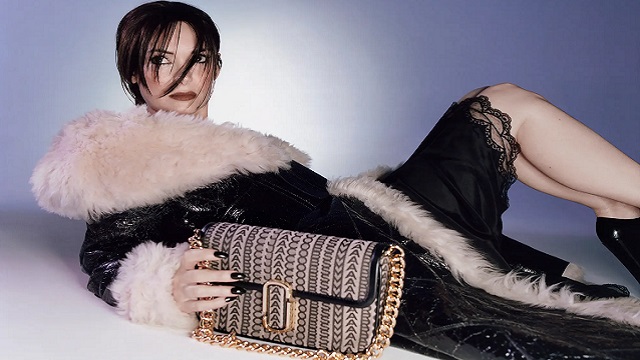 Marc Jacobs has a new ad campaign for the J Marc shoulder bag led by the celebrity model Winona Ryder. Ryder is a good choice as the actress is currently having a second career of sorts with her TV show “Stranger Things” whose recently released fourth season is a big hit.

Winona Ryder was a teen queen of the movies back in the 1980s. But the Hollywood star, born Winona Laura Horowitz to a Jewish father, fell on hard times and saw her career flounder in the 1990s. Then came her 2001 arrest and trial for shoplifting high priced items from a luxury store, which made her more infamous than famous.

Ironically, one of the items that Winona Ryder was accused of stealing at the time was a Marc Jacobs sweater. This is why Mark Jacobs chose to make her the face of the house’s Spring 2003 campaign shot by Juergen Teller.

Now 50 years old, Winona Ryder made a comeback recently by playing the mother on the hit Netflix horror/science fiction series “Stranger Things” which premiered in 2016. Of course, she had to play the mother of the young kids who are the actual heroes of the show. But her character was able to have her own serious story lines over the years.

The new ad campaign is for the J Marc shoulder bag, which is crafted from soft supple leather and features the brand’s signature interlocking J closure. According to CRFashionbook.com, the bag can be carried in three ways: as a clutch, crossbody with a webbing strap, or as a shoulder bag. The chunky chain strap takes inspiration from the house’s Stam bag, named after model Jessica Stam; an element brand aficionados will be excited to see return.

Marc Jacobs, 59, was born to a non-observant Jewish family in New York. He grew up in Teaneck, New Jersey and attended Teaneck High School. He first introduced the Marc Jacobs label in 1987, when he was only 24 years old.