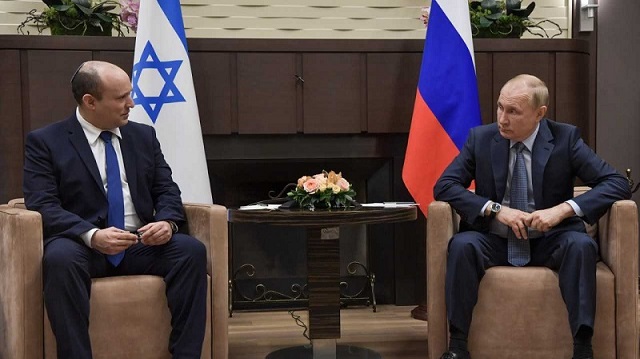 Israel’s Prime Minister Naftali Bennett spoke on Sunday with the President of Russia Vladimir Putin about the ongoing crisis in Ukraine. Russian state media reported that Bennett was the one who initiated the call and that he offered his services as a mediator, but that Putin declined.

The proposal came after Naftali Bennett spoke on Friday with the President of Ukraine Volodymyr Zelensky and offered Israel’s assistance with humanitarian aid. And Ukraine’s Ambassador to Israel Yevgen Korniychuk reportedly revealed that Ukraine’s President asked Bennett for Israel to act as a mediator between Ukraine and Russia, which, if true, may be the reason for Bennett’s call to Moscow.

Russian media also said that Mr. Putin told Naftali Bennett that the Ukrainian government has declined Russia’s offers to open talks on a cessation of hostilities. Bennett was told that a Russian delegation is located in the Belarusian city of Gomel and that it is “ready for negotiations with representatives from Kyiv.” But the Russians declared that the Ukrainians are, “showing inconsistency”, and have not yet “taken advantage of this opportunity.”

Israel’s Prime Minister spoke about the ongoing conflict in his remarks at the start of his government’s weekly cabinet meeting on Sunday. “We and the entire world are preoccupied with the difficult events in Ukraine. Today, the government will be briefed on the developments and later this evening we will hold a Cabinet meeting where we will discuss the issue in depth,” said Naftali Bennett.

“First, on behalf of all citizens of Israel, I would like to express the hope that this conflict be resolved before the war develops further and the humanitarian consequences will be much worse than we can even imagine,” added Naftali Bennett. “We are praying for the wellbeing of the citizens of Ukraine and hope that additional bloodshed will be avoided. We are conducting a measured and responsible policy.”

Naftali Bennett also told his government ministers that in the next two days a plane sent by Israel is expected to arrive in Ukraine with 100 tons of Israeli humanitarian equipment for civilians located in the combat zones. The aid shipment will include water purification kits, medical equipment as well as drugs, tents, blankets, sleeping bags and additional equipment for civilians who have been forced to flee their homes in the cold winter weather.