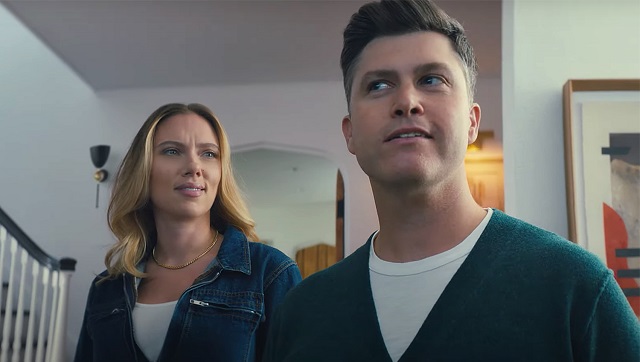 The great Scarlett Johansson, ScarJo to her fans, is in yet another Super Bowl commercial. She and her husband Saturday Night Live star Colin Jost share the screen in a new ad for Amazon Alexa. Alexa needs all of the help that it can get because Apple mobile device aficionados use Siri and Google has its own thing.

The film star also known as the Black Widow from her on screen alternate identity married Colin Jost in 2020. The two have a son together. They met in one of Scarlett Johansson’s many guest appearances on Saturday Night Live.
–

The millions of dollars per minute of air time that Amazon is paying to air the ad during the Super Bowl is probably nothing compared to the millions that it probably paid Scarlett Johansson for the ad. Oh, and the company probably gave a few bucks to Colin Jost too for his time, possibly minimum wage per hour plus bus fare.

So, what happens in the Super Bowl commercial? Well, Scarlett Johansson and her hubby try to make use of the Amazon AI talking assistant to get ready for watching the big game that will air this coming Sunday. Super Bowl LVI will be played in Los Angeles between the Cincinnati Bengals and the Los Angeles Rams. It will air

The couple is even sporting enough to poke fun at the pitfalls of married life during the commercial. At one point, Scarlet Johansson, while in bed, says, “I love that we get to sleep in,” to which hubby responds by burying his nose in his pillow. Alexa then says, “Ordering fresh mint mouthwash. Extra strength.” ScarJo then checks her breath to see what the problem is.

At one point Scarlett Johansson and Colin Jost point out how awkward it is that that Alexa seems to be able to even read one’s mind. We then get to see Alexa start the blender which makes a lot of noise just at the moment went Johansson seems to be annoyed with the story that Jost is telling her. We get it – Alexa can come to the rescue. But does Amazon really want people to think that it can really read their minds? People might come away from this thinking that all of those paranoid conspiracy theories about the internet and 5G wireless