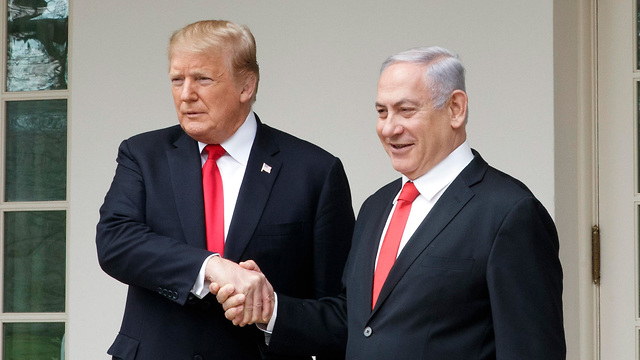 Benjamin Netanyahu was described by many as a sycophant for how he acted around Donald Trump. Also for the way that the former Israeli prime minister spoke about the former president. But Donald Trump has a short memory and now he hates Netanyahu, even saying “F” him.

Israeli over the weekend have been eating up the story that has come out while Netanyahu is in the middle of a trial over corruption charges.

Trump thinks that Netanyahu did not wait long enough before congratulating Biden. “It was early. OK? Let’s put it this way — he greeted him very early. Earlier than most world leaders. I’ve not spoken to him since. F**k him.” But how long should Netanyau have waited? Until after January 6? After the inauguration of Biden as president? Or, maybe never.
–

For Donald Trump, everything is personal. This includes even the foreign policy moves that he made as President. If Trump recognized Jerusalem as Israel’s capital, the Netanyahu and all Israelis are required to pay him fealty forever. Never mind that Netanyahu had a new town named for Trump in Israel’s Golan region. Never mind that Netanyahu and others have treated Trump like a savior and have tried to seal his place in Jewish history on the level of a King Cyrus of Persia who let the exiled Jews return home to Israel and rebuild the Temple in Jerusalem about 2,500 years ago.

With Donald Trump all that counts is today and a friend is someone who will never tell you that you are wrong.

“There was no one who did more for Netanyahu than me. There was no one who did for Israel more than I did. And the first person to run to greet Joe Biden was Netanyahu,” Trump says in the tape. “And not only did he congratulate him — he did it in a video. If you look at the leaders of other countries — like Brazil — he waited months. Putin. Many other leaders. Mexico. All of them also felt that the election was over. But they, too, were waiting. No one did more than me for Bibi. Money too. We gave them a lot of money and gave them soldiers. We did everything.”

In other Benjamin Netanyahu news, Israeli authorities have decided to cease providing his family with security protection now that it has been six months the former premiere left office. This means that his wife and kids will no longer have a car and driver at their disposal and at the tax payers’ expense.