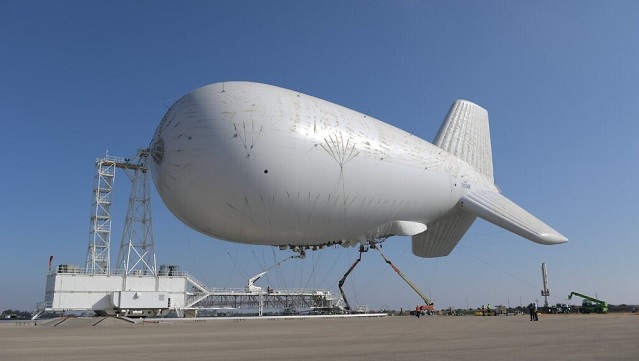 Tal Shamayim Sky Dew blimp to detect incoming missiles and drones, as seen at its home base on November 3, 2021 (Pic from Israel’s Defense Ministry)

Sky dew: It’s a bird, it’s a plane, it’s the Hindenburg returned, wait, no, it’s the Good Year Blimp! It’s not even Superman! Its Israel’s new way to defend itself from missile attacks.

Israel’s Missile Defense Organization (IMDO), is a division within the Directorate of Defense Research and Development (DDR&D), at Israel’s Ministry of Defense. IMDO is responsible for the development, management and improvement of Israel’s active defense systems including interceptors, launchers, radars, command and control systems, network connectivity and more.

Israelis, however unfortunate this may be, have gotten use to rockets and missiles being fired at their country by terrorists based in Gaza – Hamas- or Lebanon – Hezbollah. In the 2006 Lebanon War, Hezbollah launched missiles indiscriminately at civilian targets all across northern Israel. They even had ones with a range to get near to Tel Aviv.

Most recently, this past June Hamas launched a surprise attack on Israel, claiming that they were coming to the aid of Arabs in Jerusalem set to be evicted from homes owned by Jews. The group gave all of one hour’s warning with its ultimatum that Israel withdraw from Jerusalem. It then launched missiles that made it as far as the city, but were shot down by Israel’s Iron Dome missile defense system.

Well, it is a really big blimp that uses a High Availability Aerostat-borne System and advanced radar. It can operate at high altitudes, thus enabling it to detect and provide an early warning for threats coming from the north, meaning Lebanon and Syria.

This radar system was developed under a cooperative program between IMDO and the US Missile Defense Agency (MDA).
–

Israel’s Minister of Defense Benny Gantz congratulated everyone involved in the project calling it, “another technological breakthrough that will strengthen the defense of Israel’s skies and Israeli citizens.”

“The success of the new system fortifies the wall of defense that Israel has built in the face of the distant and imminent air threats being built by its enemies,” added Gantz. “Through the detection capabilities, and the multi-layered defense system, Israel’s advantage in the area will be preserved, and the operational scope required to maintain its security will be enabled.”