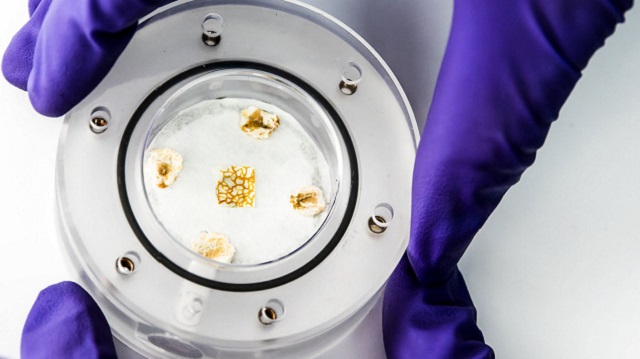 Closure of the box containing a blob and 4 sources of food (cereals)
© CBI/CRCA/CNES/CNRS PHoto by David VILLA / ScienceImage, NASA 2021

NASA is sending the Blob up to the International Space Station. Yes, you heard that correctly! The Blob will be launched up into space on August 10, flying aboard Northrop Grumman’s 16th commercial resupply services mission to the ISS.

No, this is not the blob from the movies. That was an alien creature that fell to earth in a meteorite. What started as a small piece of jelly grew and grew as it ate the people with who it came into contact.

This blob is something that comes from our very own planet Earth and does not eat people. At least we hope it doesn’t.
–

NASA explains that the objective of the Blob investigation is to study the effects of the environment aboard the International Space Station (ISS), primarily the effects of microgravity and radiation, on the behavior of the Blob organism. The Blob, whose scientific name is Physarum polycephalum, is a unicellular organism that belongs to the amoebozoa kingdom and the myxomycetes class.

This Blob is a strange one, however. It has inexplicably been shown to have cognitive abilities and has even solved mazes and other puzzles. It has also shown an ability to somehow communicate with other molds. Well, let’s hope that once in space it doesn’t turn into a man-eating monster like in that Ryan Reynolds movie “Life.”
–

“Blob is a unique experience that stimulates student curiosity about themes such as the impact of the environment on organisms and the development of living organisms,” said Evelyne Cortiade-Marché, head of the CNES education department, in a statement. “This educational experiment offers the opportunity to carry out a real scientific experimental process in a playful, collaborative and media-oriented context.”