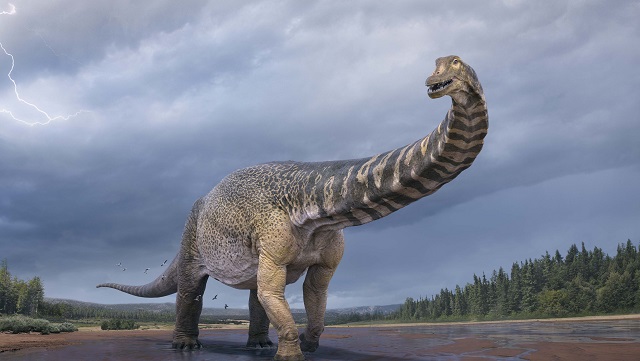 Move over Barney! Someone alert Fred Flintstone there’s a new kind of dinosaur out there! Scientists have uncovered what they are calling the Australotitan cooperensis down under in Australia. And no, this dinosaur most definitely did not walk upside down nor did it stick to the left side of the road.

But it did like barbecues, beer, beaches and it did make the other dinosaurs laugh due to its silly accent.
–

Paleontologists released the news about this dinosaur in a study published in Paleontology and Evolutionary Science. And no, Ross Gellar was not involved in the research because, while a paleontologist, Gellar was just a fictitious television character and did not really exist.

The Queensland Museum explains that Australotitan, the “Southern Titan of the Cooper,” is named from where it was found. It has been scientifically described by palaeontologists and staff at Queensland Museum and the Eromanga Natural History Museum. The fossilized skeleton was originally nicknamed ‘Cooper’ after the nearby Cooper Creek where it was first discovered by the Mackenzie property owners and excavated with Queensland Museum in 2007. Finding ‘Cooper’ has changed the lives of the Mackenzie family and has led to the establishment of the Eromanga Natural History Museum.

According to the scientists, this is a new giant sauropod, Australotitan cooperensis gen. and it represents the first record of dinosaurs from the southern-central Winton Formation of the Eromanga Basin, Australia. They estimate the type locality to be 270–300 meters from the base of the Winton Formation and compare this to the semi-contemporaneous sauropod taxa, Diamantinasaurus matildae Hocknull et al., 2009, Wintonotitan wattsi Hocknull et al., 2009 and Savannasaurus elliottorum Poropat et al., 2016. 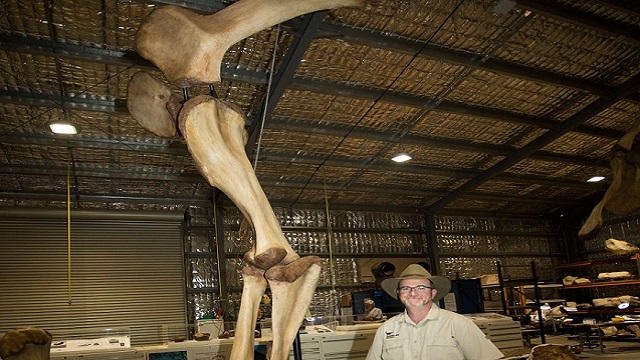 The new titanosaurian is the largest dinosaur from Australia as represented by osteological remains and based on limb-size comparisons it reached a size similar to that of the giant titanosaurians from South America.

The Australotitan was part of a group of dinasaurs called the titanosaurians. This was the last surviving group of long-necked sauropods and the largest known land-dwelling animals to have ever existed. Australotitan was one of the 15 largest dinosaurs in the world. It is estimated to have reached a height of 20 feet at the hip and a length of as much as 100 feet. It could have weighed as much as 150,000 pounds.

So someone please tell Steven Spielberg to include this dinosaur in his next Jurassic Park movie.