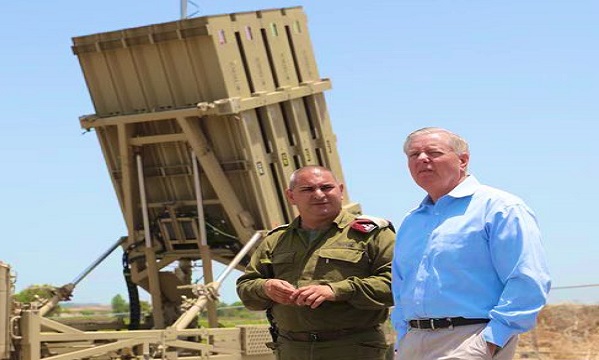 Lindsey Graham, the Republican Senator from South Carolina, is visiting Israel this week. He has already met with Prime Minister Benjamin Netanyahu. The Senator has revealed that the Israeli government will look for an additional $1 billion in military aid from the United States to replenish its Iron Dome missile defense system.

The Iron Dome system was central to Israel’s defense during the recent fighting with the terrorist group Hamas. It succeeded in shooting down the vast majority of the missiles which Hamas launched at Israeli cities from its bases in the Gaza Strip.
–

In a press conference which was held on Monday Senator Graham said, “There will be a billion dollar demand at the Pentagon this week from Israeli Defense Minister [Benny Gantz] to replenish and improve the Iron Dome.”

“The Iron Dome has worked incredibly well, saving thousands of Israeli lives and tens of thousands of Palestinian lives,” added Graham. “So I imagine the [Biden] administration will say yes to this request and go through Congress.”

Senator Graham also tweeted, “To those on the American Left who believe that the conflict between Hamas and Israel has been spurred on by right wing politics in Israel — you do not understand the nature of the conflict. Hamas in Gaza and Hezbollah in Lebanon are radical Islamic groups that wish to destroy the Jewish state — not because of Netanyahu — but because of their religion.”

“If you don’t understand this, you’re making the biggest mistake since Neville Chamberlin’s Munich Agreement with Hitler,” he added. “I urge the Middle and Left of Israeli politics to set the American Left straight as to the true nature of this conflict while we still have time.”
–

Day 2 in #Israel and on the way to Ashkelon. pic.twitter.com/u0xYz6svTV

Republican Senator from Texas Ted Cruz is also in Israel. According to Israel’s Prime Minister’s Office, Senator Cruz said in a meeting that Israel, “not only has the right, but also the responsibility to defend itself.”

In this article:Finance, Iron Dome