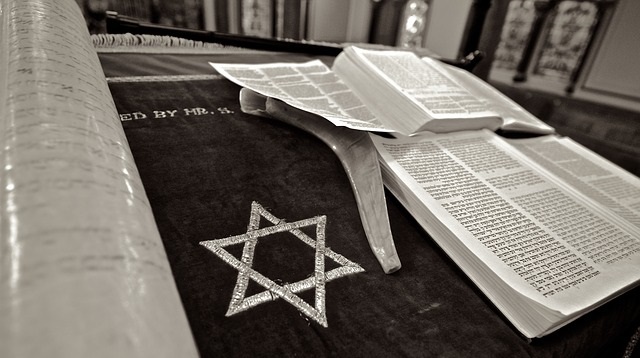 The Pew Research Center has released a new survey on the religious attitudes and affiliations of the American Jewish community. The study was conducted for the year 2020. The results are similar to those of another study Pew conducted just a few years ago. Orthodox Jews are seeing an increase in both their numbers and their share of the community’s total population while the Conservative and Reform groups have shrunk.

In 2013 a Pew survey created a stir in the American Jewish community when it showed that the Reform had passed the Conservative in size as determined by the number of respondents describing themselves as Reform. Today the gap has increased with the Reform seeing almost four times as many Jews under 30 identifying with it as who identify as Conservative. At this rate the Conservative may become defunct sometime in the near future.

According to the Pew report, more than one quarter of U.S. Jewish adults — 27% — do not identify with the Jewish religion. Of these Jews, they see themselves as Jewish ethnically, culturally or by family background. The have a Jewish parent or were raised Jewish, but they answer a question about their current religion by describing themselves as atheist, agnostic or “nothing in particular” rather than as Jewish. Among Jewish adults under 30, four-in-ten describe themselves this way. 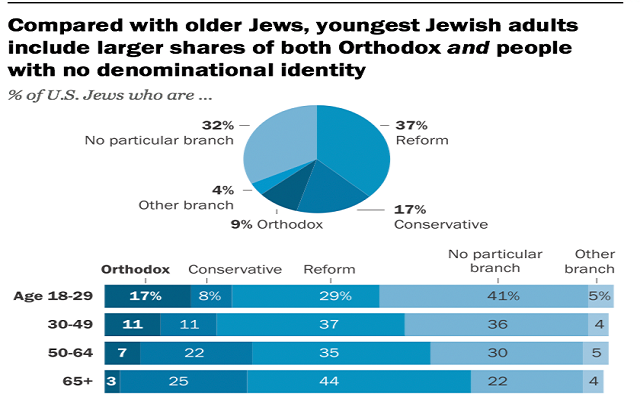 The news is worst for the two traditionally largest Jewish denominations in America, the Reform and the Conservative. According to Pew, only about four-in-ten Jewish adults under 30 identify with either the Reform – 29% – or Conservative Judaism -8%. This is compared with 70% of those Jews ages 65 and older. This clearly shows that these two groups combined have lost about half of their affiliates over the generations. That is, unless, many people under the age of 30 who are not inclined to hold a synagogue membership change their minds once they have families and go back to the denomination of their youths.

However, these figures stand in stark contrast to the American Orthodox Jewish community.

Pew shows that younger Jewish adults are much more likely than older Jews to identify as Orthodox. Among Jews ages 18 to 29, 17% self-identify as Orthodox, compared with just 3% of Jews 65 and older. And fully one-in-ten U.S. Jewish adults under the age of 30 are Haredim, or ultra-Orthodox – 11% – compared with 1% of Jews 65 and older. This can be attributed to the much higher birthrate in the orthodox community. But it is also because many young people from non-orthodox homes have been moving towards the orthodox world for decades now. 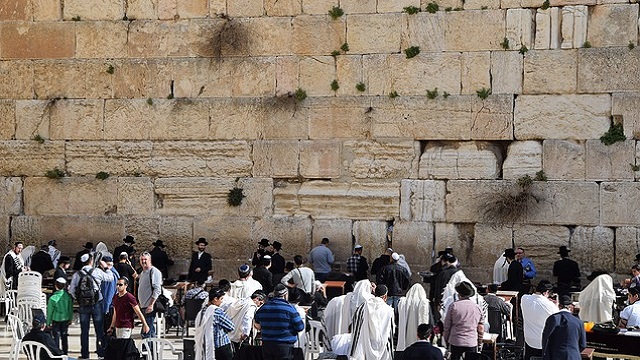 As for Israel, the survey found that young American Jews are less emotionally attached to Israel than older ones. As of 2020, half of Jewish adults under age 30 describe themselves as very or somewhat emotionally attached to Israel -48%- compared with two-thirds of Jews ages 65 and older. This can also be attributed to how younger Jews are less likely to identify as religious or affiliated with any synagogue or denomination.

The non-orthodox denominations in America have attributed the decrease in support for Israel and feelings of a connection to it among American Jewish youth to that country’s religious policies. In Israel only the orthodox rabbinate is recognized as an official form of Judaism for marriages and other purposes. They also cite Israel’s recent policies towards the Palestinians as another cause. But this fails to acknowledge that they themselves have seen a deterioration in their own memberships with more and more of their new generations of youth either re-affiliating in some way or becoming secular.

Whatever the reasons, the results of this Pew study will likely only find a positive repose within the American orthodox Jewish community. The other denominations will need to understand why they are shrinking and find ways to reverse the trend.

The study also showed that the majority of American Jews identify as liberals politically and vote for the Democratic Party over the Republican in elections. Most also gave Israel’s conservative Prime Minister Binyamin Netanyahu a negative review. https://www.pewresearch.org/fact-tank/2021/05/21/u-s-jews-have-widely-differing-views-on-israel/

As for the recent conflict in Gaza, Pew found that Orthodox Jews were more likely than Jews in other denominations to say that the Israeli government was making a sincere effort to reach a peace settlement with the Palestinians and that God gave the land that is now Israel to the Jewish people. By contrast, most Jewish Americans said they did not think that either the Israeli government or Palestinian leaders were sincerely seeking peace. And most Jewish adults took the position that God “did not literally give” the land of Israel to the Jewish people -42%- or said they do not believe in God or a higher power at all -24%. 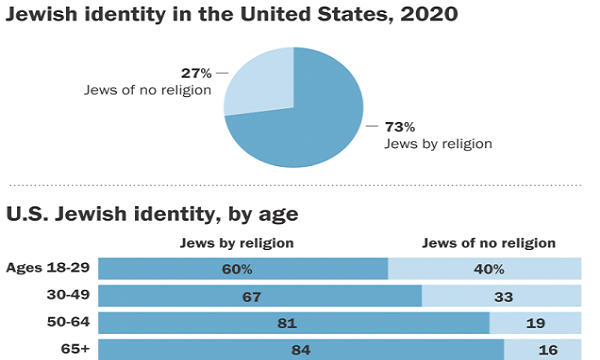 How Pew Conducted the Survey:
For this report Pew surveyed 4,718 U.S. adults who identify as Jewish, including 3,836 Jews by religion and 882 Jews of no religion. The survey was administered online and by mail by Westat, from Nov. 19, 2019, to June 3, 2020. Respondents were drawn from a national, stratified random sampling of residential mailing addresses, which included addresses from all 50 states and the District of Columbia. No lists of common Jewish names, membership rolls of Jewish organizations or other indicators of Jewishness were used to draw the initial sample.

Pew first sent letters to the sampled addresses asking an adult (18 or older) living in the household to take a short screening survey (“the screener”) either online or on a printed paper form, which they mailed back to us. The screener collected demographic characteristics and determined eligibility. In households with more than one adult resident, we selected the respondent randomly by some simple method, such as asking the person who most recently celebrated a birthday to fill out the screener.

A total of 68,398 people across the country completed the screener. Respondents who indicated in the screener that they are Jewish were asked to take a longer survey. Three criteria were used to determine eligibility for the extended survey: (1) if the responding adult said their current religion is Jewish; (2) if the responding adult did not identify their religion as Jewish but said that, aside from religion, they consider themselves to be Jewish in any way, such as ethnically, culturally or because of their family background; (3) if the responding adult did not identify with the first two criteria but said they were raised in the Jewish tradition or had a Jewish parent. All adults who reported any of these criteria were given the extended survey to complete.