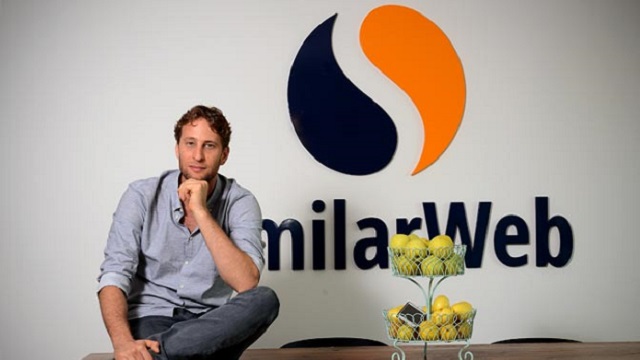 SimilarWeb CEO and founder Or Offer

Similarweb Ltd., an Israeli provider of digital intelligence solutions has publicly filed a registration statement on Form F-1 with the U.S. Securities and Exchange Commission (“SEC”) relating to a proposed initial public offering of its ordinary shares. According to Globes, Similarweb is looking at a valuation of up to $2 billion from its IPO. The number of shares to be offered and the price range for the offering have not yet been determined. Similarweb intends to list its ordinary shares on the New York Stock Exchange under the ticker symbol “SMWB.”

Founded in 2007 by CEO Or Offer and Nir Cohen, Similarweb declares its mission to be to deliver the “most trusted, comprehensive, and detailed view of the digital world, so our customers can outperform their competition and win their markets.” The company has raised $240 million to date including $120 million in new funding last October.

The company recently declared itself to be a new Similarweb. They updated their logo, typeface, colors, and imagery with photography and some “really cool illustrations.” The company also transformed from SimilarWeb to Similarweb. It is not clear, though, how changing from a capital “W” to a lower case one makes much of a difference.
–

This is now the 15th Startup Nation company to declare its expectation for a billion dollar plus IPO in just the last six months. It joins startups like Nayax, OrCam, Taboola, EToro and REE Automotive. Innoviz Technologies just recently held a successful $1 billion IPO. Playtika hit an $11 valuation when it went public in January.

So how exactly do they determine what the price of a new stock should be when a company first goes public? How do the finance people on Wall Street decide how much to ask per share of stock issued based on the percentage of the company which it represents?
–

In 2020, online #job portals had to rush to the drawing boards to pivot their strategies, paying careful attention to #benchmarking metrics in order to stay ahead of the competition. https://t.co/p9XFKRhgXd pic.twitter.com/pkfwJxHCMt

Well the first answer to the question is supply and demand. Things are worth what people are willing to pay for it and so if a can of soda on the street in Manhattan sells for $2 or $10 its because people are willing to spend that much money for it. So financial researchers price the market, compare what similar companies are valued at, find out what the demand is for the new company’s stock and what the people on the street think of its chances to go up in the future.

But even before that a company already has a valuation based on what investors were willing to pay for a share of it. Is someone pays $5 million for a 5% stake in a company then the company is worth $100 million. But a lot can happen after that investment is made as far as a company’s value.

The market might change, or another startup might beat it to the finish line thereby greatly diminishing its value. Or the opposite could happen. The company could make a major breakthrough in its field or increase sales considerably between its last round of investment and its decision to go public.

In this article:IPO, Finance, SimilarWeb