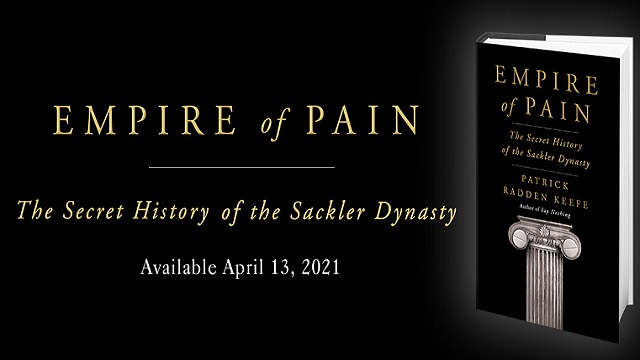 The Sackler family is still reeling from the whole Oxycodone scandal which forced their Purdue Pharma company into bankruptcy. The family was forced out of the business and some of its members have been accused of lying under oath when testifying before the Congress about what they knew and did in regards to Pharma’s “pushing” of the drug. And now the Sacklers must deal with a mountain of revelations in a new tell all book called “Empire of Pain: The Secret History of the Sackler Dynasty.”

Written by Patrick Radden Keefe, an award-winning staff writer at The New Yorker magazine and the author of Say Nothing: A True Story of Murder and Memory in Northern Ireland,” the new book is due out on Tuesday April 13.

The publishers describe “Emprie of Pain” as a grand, devastating portrait of three generations of the Sackler family, famed for their philanthropy, whose fortune was built by Valium and whose reputation was destroyed by OxyContin.

Among the book’s revelations are the story of how father Mortimer Sackler was absent from his family and ran off to France with his lover. Mother Muriel was forced to raise her kids alone. In 1975 their son Bobby Sackler, then 24, committed suicide by jumping out the window of their apartment building in Manhattan. Bobby Sackler was said to have suffered from mental illness and the family covered up his suicide.

The book goes into detail about how the Sacklers made their fortune. Arthur Sackler, the son of Jewish immigrants, became a doctor and built up the pharmaceutical company.

The New York Times writes, “Keefe nimbly guides us through the thicket of family intrigues and betrayals — how Arthur purchased the patent medicine company Purdue Frederick for his brothers, Mortimer and Raymond, in 1952, before he grew apart from them; and how Arthur’s heirs sold their shares to the surviving brothers after he died in 1987. Arthur’s descendants have tried to distance themselves from their cousins, protesting that they weren’t involved in the creation of OxyContin, but Keefe suggests they can’t get away from Purdue’s origin story. Arthur had created a fortune and a template.”

Daniel Connolly, an attorney representing the Raymond Sackler branch of the family, sent a statement to NPR last week criticizing Empire of Pain. He accused Keefe of “refusing to meet with representatives for the Sackler family during the reporting of his book.”

The Mortimer Sackler branch of the family also sent NPR a statement saying, “Our focus is on concluding a resolution that will provide help to people and communities in need, rather than on this book.”

From the publishers:
Empire of Pain begins with the story of three doctor brothers, Raymond, Mortimer and the incalculably energetic Arthur, who weathered the poverty of the Great Depression and appalling anti-Semitism. Working at a barbaric mental institution, Arthur saw a better way and conducted groundbreaking research into drug treatments. He also had a genius for marketing, especially for pharmaceuticals, and bought a small ad firm.

Arthur devised the marketing for Valium, and built the first great Sackler fortune. He purchased a drug manufacturer, Purdue Frederick, which would be run by Raymond and Mortimer. The brothers began collecting art, and wives, and grand residences in exotic locales. Their children and grandchildren grew up in luxury.

Forty years later, Raymond’s son Richard ran the family-owned Purdue. The template Arthur Sackler created to sell Valium—co-opting doctors, influencing the FDA, downplaying the drug’s addictiveness—was employed to launch a far more potent product: OxyContin. The drug went on to generate some thirty-five billion dollars in revenue, and to launch a public health crisis in which hundreds of thousands would die.

This is the saga of three generations of a single family and the mark they would leave on the world, a tale that moves from the bustling streets of early twentieth-century Brooklyn to the seaside palaces of Greenwich, Connecticut, and Cap d’Antibes to the corridors of power in Washington, D.C. Empire of Pain chronicles the multiple investigations of the Sacklers and their company, and the scorched-earth legal tactics that the family has used to evade accountability. The history of the Sackler dynasty is rife with drama—baroque personal lives; bitter disputes over estates; fistfights in boardrooms; glittering art collections; Machiavellian courtroom maneuvers; and the calculated use of money to burnish reputations and crush the less powerful.