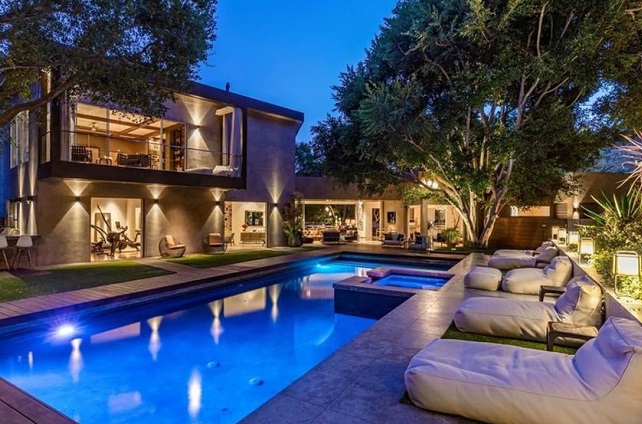 Entertainer and political activist Chelsea Handler has just turned a tidy profit on her Bel Air mansion selling it for $10.5 Million. The house was bought for $5.94 million in 2010.

According to Architectural Digest it has 5,572 square feet and after some changes it is now a “bright, open-plan space with plenty of large windows looking out at the surrounding greenery.” Chelsea Handler told the magazine, “We tore the house apart, inside and out, while keeping the main frame. I had to move out a couple of times, and I did a lot of construction—but I just really wanted it to have that indoor-outdoor California vibe: soft, contemporary, and really clean.”

“I am not a huge bath person,” said Handler. “I am not British so I don’t have an affinity [for it] the same way others do, but because of this tub I have taken more baths than I probably ever would. It’s nice to be able to sit up in a tub.” 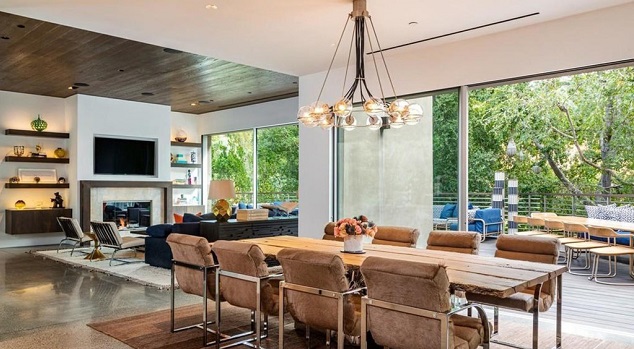 From the listing:
Complete Privacy up a long gated driveway, warm modern retreat surrounded by lush greenery. Renovated to exacting standards by current owner, walls of glass open to large 50ft pool and outdoor entertaining spaces. A loft like great room for living/dining, gourmet kitchen and intimate den all set the stage for a glamorous lifestyle. Upstairs master suite is the ultimate hideaway with beautiful terrace, large closet/dressing room, marble bath with infrared sauna and steam shower. 5 additional bedrooms perfect for guests, one being used as a gym. Sense of calm and serenity throughout. Complete Crestron automation. Additional features include: full outdoor kitchen with pizza oven, meditation garden, walking paths, off street parking for 4 cars.

The comedian has also been trolling outgoing President Donald Trump on social media.

In opposition to those who are threatening to boycott companies like Twitter which have banned the President she tweeted, “Let’s boycott companies who don’t stand up for democracy and truth. They don’t deserve our business.”

“Hello, @YouTube we need you to step it up and ban Trump. This is the only result we are willing to accept. It is your duty to protect your platform from lies and misinformation. Commit.”

Handler also taunted Trump with a baby pic of herself saying, “This is me at age 2. Coincidentally, 2 is also the same number of times Donald Trump has been impeached.”

And Chelsea Handler just posted a pic of herself on Instagram doing some gymnastic with the caption, “’Home stretch Get it? 5 days until we have a new administration and we can all take a deep ducking breath.”

In this article:Finance, Chelsea Handler