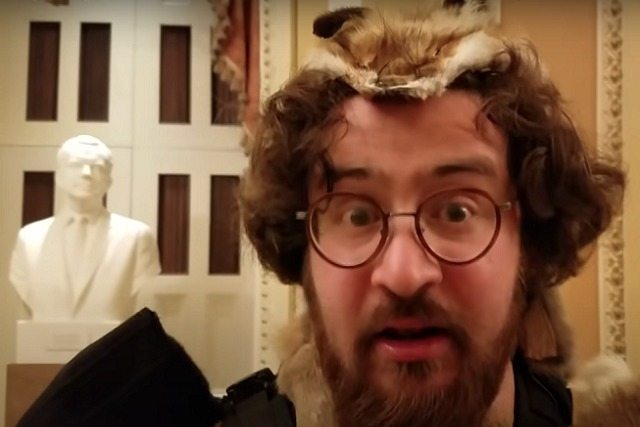 Aaron Mostofsky, the son of Brooklyn Supreme Court judge Shlomo Mostofsky, is a Jewish man who took part in the attack on the U.S. Capitol last Wednesday.

Mostofsky gave an interview on film to The New York Post while the rioting was still going on. In the video he can be seen wearing some kind of fur in what looks like a Halloween costume that was supposed to be a tiger or something like that. Mostofsky also wore a bullet proof vest with the word “Police” printed on it. He had the demeanor of a man who seems to be on the spectrum as he spouted the same conspiracy theories that were espoused by the other rioters.

“We were cheated. I don’t think 75 million people voted for Trump — I think it was close to 85 million. I think certain states that have been red for a long time turned blue and were stolen, like New York,” Aaron Mostofsky told the NY Post.

“[I did it] to express my opinion as a free American that this election was stolen,” he added, echoing the refrain which has been emanating from the President himself for the last two months. Many blame President Trump for spreading the false belief among his supporters that he was somehow cheated out of reelection. These complaints culminated in Wednesday’s riot.

“[They] shouldn’t be afraid; they should get the courage to do their duty to examine the fraud and maybe delay the election.”

He added, “We [shouldn’t] rewrite the law because of COVID. It’s not ‘Give me liberty or give me death’ — but COVID.”

Many of the rioters who were pictured in the Capitol building during the attack have been arrested in the last few days in different states, even as far away as Hawaii. But as of now Aaron Mostofsky has not been detained.

His brother, Nachman Mostofsky, told Gothamist “My brother did nothing illegal. He definitely was not part of the riot.” Nachman said that his brother must have somehow been pushed into the Capitol building by other people.

Angered by the implication that his brother was guilty of insurrection against the United States, Nachman Mostofsky told the reporter, “You’re full of shit. You’re a dishonest person. My brother went as a citizen of America. You find me one [Black Lives Matter] riot or one Antifa riot from over the summer that didn’t have way more damage.”