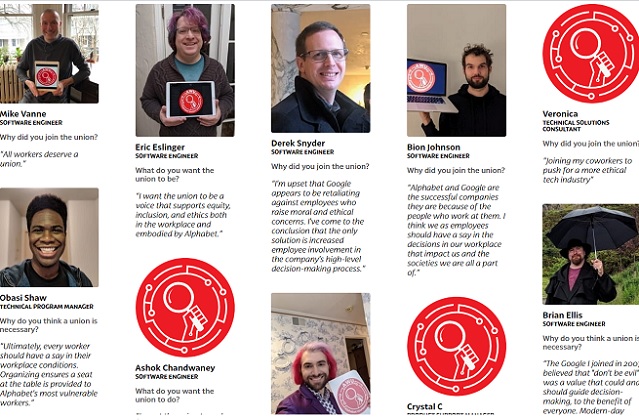 A new union for Google and Alphabet employees has been formed. Alphabet Workers Union has just announced its launch and it will be open to anyone with even a peripheral employment connection to the company, including vendors.

This will be a different kind of union. Alphabet Workers Union does not wish to negotiate any collective bargaining agreements with Alphabet. In this way it will not need to follow all of the laws regarding the formation of unions, nor will it need a minimum number of Alphabet employees joining it.

The new union will only represent those people who choose to join it. This means that Alphabet Workers Union will be able to include anyone who works for Google, even if they are only part time workers or independent contractors.

And it won’t just be about salaries and benefits for Alphabet’s workers. The union will also try to prevent Google from engaging in controversial missions such as Project Maven. Project Maven was controversial not only because it worked with the military on artificial intelligence systems which could identify individuals filmed by spy drones around the world, but also because it employed people in the so called “gig” economy. These are people who need whatever work they can get and so they drive for Uber.

We’re Alphabet workers. We’ve been organizing for over a year, & we’re finally ready to share why.

This morning, we’re announcing #AWU, the first union open to *all* workers at any Alphabet company.

The new union declares that its mission is to “protect Alphabet workers, our global society, and our world.” It states that it will promote solidarity, democracy, and social and economic justice.

“This union builds upon years of courageous organizing by Google workers,” said Nicki Anselmo, Program Manager. “From fighting the ‘real names’ policy, to opposing Project Maven, to protesting the egregious, multi-million dollar payouts that have been given to executives who’ve committed sexual harassment, we’ve seen first-hand that Alphabet responds when we act collectively. Our new union provides a sustainable structure to ensure that our shared values as Alphabet employees are respected even after the headlines fade.”

The Alphabet Workers Union has listed the following social issues among its goals:

To fight the systems of oppression that persist to this day, we stand in solidarity with workers and advocates everywhere.

Our work impacts other Alphabet workers, our communities, and the world. All aspects of our work must be transparent, and we must have the freedom to choose which projects benefit from our labor.

Alphabet can make money without doing evil. We must prioritize the wellbeing of society and the environment over maximizing profits.

Alphabet’s guiding principle used to be “Don’t be evil.”

Help us be Alphabet’s conscience.