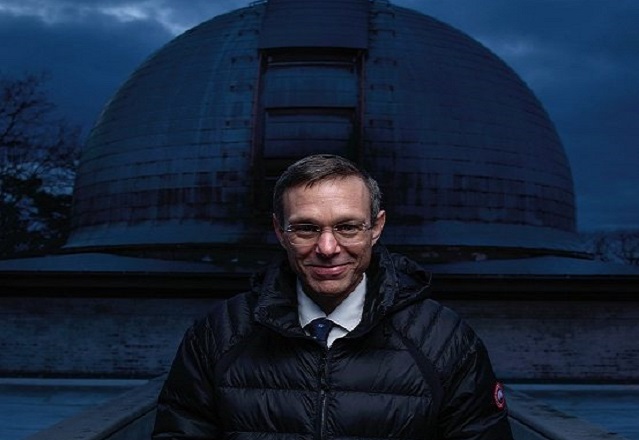 Astronomer Abraham (Avi) Loeb says that we were visited by some sort of extra terrestrial device in 2017. In his new book “Extraterrestrial: The First Sign of Intelligent Life Beyond Earth,” Professor Loeb explains that the Oumuamua object which passed through our solar system was not just a giant piece of space rock, but some sort of alien space ship.

The object was dubbed Oumuamua and originated in Vega, a star 25 light-years away. After zigzagging through the solar system the object headed away from our sun and on to other solar systems. Oumuamua comes from the Hawaiian word for “scout.”

Israeli scientist Abraham (Avi) Loeb is the Frank B. Baird, Jr., Professor of Science at Harvard University. He received a PhD in Physics from the Hebrew University of Jerusalem in Israel at age 24.

When we think of alien visitations we think of friendly encounters like in the movies ET and Close Encounters of the Third Kind, or man eating monsters like the Alien movies. Then there are the evil aliens bents on conquest and destruction like in “Independence Day.”

But according Professor Avi Loeb, Aliens have already visited us, they just didn’t bother to say hello. This may seem rude, but if you are a sci-fi buff then you know that it is possible they think we are too primitive and do not want to interfere with us. Or maybe this was just some sort of advance reconnaissance mission.

The theory here is that Oumuamua may very well have been some sort of alien probe that was just checking out our solar system. Think of the Voyager probes which NASA launched back in the 1970s. These probes will leave out solar system someday and travel to the beyond. They could someday pass through other solar systems in the same way.

But how did the Professor draw his conclusions? Well it all has to do with physics. Oumuamua did not follow the proper trajectory and speed expected of an object of its size and mass when affected by the gravity of the sun and planets like Earth and Venus.

It should have been caught by the sun’s gravity and hurled towards it. But it did not. “The excess push away from the sun, that was the thing that broke the camel’s back,” Loeb said.

So why did all of the other astronomers not pick up on these things before. Well as Avi Loeb explained, “What would happen if a caveman saw a cellphone? He’s seen rocks all his life, and he would have thought it was just a shiny rock.”

“In Extraterrestrial, Loeb takes readers inside the thrilling story of the first interstellar visitor to be spotted in our solar system. He outlines his controversial theory and its profound implications: for science, for religion, and for the future of our species and our planet. A mind-bending journey through the furthest reaches of science, space-time, and the human imagination, Extraterrestrial challenges readers to aim for the stars—and to think critically about what’s out there, no matter how strange it seems.”