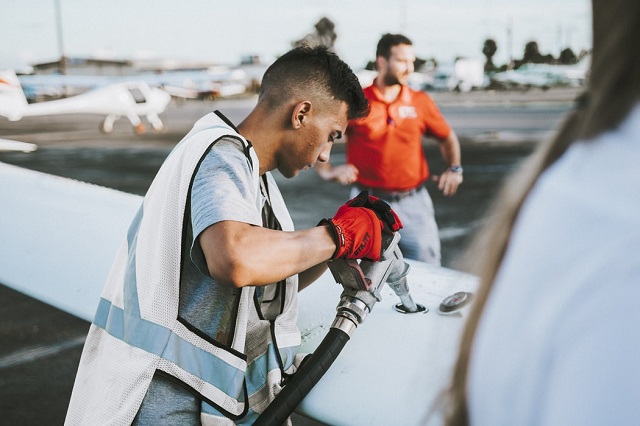 Imagine if you could make jet fuel out of carbon dioxide (CO2). That would amount to an environmentally friendly two for the price of one: make jet fuel from something other than carbon emitting fossil fuels which turn into greenhouse gasses, while also cleaning the atmosphere of excess CO2. Talk about a green revolution.

Jet fuel is made from a mixture of a variety of hydrocarbons and is used to power gas-turbine engines. The jet engine is much more complex than the automobile engine and so it needs a specialized form of fuel to be operated. The average jet airplane emits a massive amount of greenhouse gases per every hour of flight.

Well apparently scientists from Oxford University believe that they can do something about that by creating jet fuels out of the excess of carbon dioxide in the atmosphere. . But how? They published their findings in Nature Communication.

They reported a new synthetic protocol to the fixation of carbon dioxide by converting it directly into aviation jet fuel using novel, inexpensive iron-based catalysts. They showed a carbon dioxide conversion through hydrogenation to hydrocarbons in the aviation jet fuel range of 38.2%, with a yield of 17.2%, and a selectivity of 47.8%, and with an attendant low carbon monoxide (5.6%) and methane selectivity (10.4%).

In other words, they can turn CO2 directly into a fuel which, in turn, does not pollute the atmosphere as much as other forms of energy.
As the carbon dioxide is extracted from air, and re-emitted from jet fuels when combusted in flight, the overall effect is a carbon-neutral fuel. This contrasts with jet fuels produced from hydrocarbon fossil sources where the combustion process unlocks the fossil carbon and places it into the atmosphere, in longevity, as aerial carbon – carbon dioxide.

Now imagine if this can be applied to other areas and on a wide scale. Power plants could filter CO2 from the air and use it to generate electricity. We could see filters everywhere cleaning pollution out of the air in big cities, converting it into fuel. And maybe much more CO2 could be cleaned from the air than is needed for the fuel. This could lead to reducing the greenhouse gases already in the atmosphere, instead of just reducing the rate at which they increase each year.

In this article:Oxford University, Finance