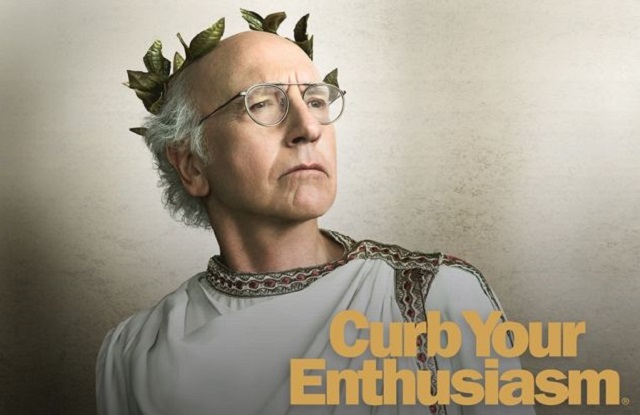 Larry David has been navigating the California lockdowns caused by the Coronavirus crisis while filming another season of his hit show “Curb Your Enthusiasm.” The famed “Seinfeld” co-creator has somehow been able to do so, in spite of being a famous self-described germaphobe, with the help of show producer Jeff Schaffer.

Jeff Schaffer explained how he did it in an interview with The Hollywood Reporter. “We started writing Curb before COVID, and then when COVID happened we had to change some things,” he said about the problems faced in completing production on the HBO comedy’s new 11th season.

The producers needed to create a special Covid bubble within a bubble for Larry David. All television and movie productions work in a bubble today with continuous Covid testing and social distancing from people outside of the bubble. But Jeff Schaffer had to go a step further for David’s sake.

They began filming “Curb Your Enthusiasm” in November. Since then they were only forced to shut down production once and then only for a day.

Another problem for Curb Your Enthusiasm was how exactly to work the Coronavirus into the show. Larry David plays himself in what is intended to be an accurate portrayal of how the actor lives his life, but in an overdramatized way. So any such portrayal needed to be based around how the Curb version of Larry David would really react to the Covid-19 crisis.
–

You know, I believe they need to rethink this social distancing strategy. 12 feet minimum if you’re at your job.

“We started writing Curb before COVID, and then when COVID happened we had to change some things,” said Schafer. “We had to make the decision about what era we were writing — before, during or after COVID — and the real factor was when we would be premiering. We figured we would be coming out in the fall of 2021 and we didn’t want what we were writing in March of 2020 to be so timely that it would feel dated more than a year later.”

In the end they decided to set the new season of Curb Your Enthusiasm in a post-COVID world. This would seem to have been the right choice now that the new Coronavirus vaccines are being distributed around the world. So hopefully, this will all be over by the time the new season premieres.
–

But they could have always filmed shows set during the pandemic related shutdowns in a flashback format. It would be really funny watching the neurotic Larry David deal not only with the fear of Covid-19, but also with all of the people not taking the pandemic seriously.

Larry David does not tweet much, but in only his second Tweet for all of 2020 made in September he said, “You know, I believe they need to rethink this social distancing strategy. 12 feet minimum if you’re at your job.” Was Larry David trying to tell us something about his current work conditions?

In this article:Larry David, Finance, Coronavirus