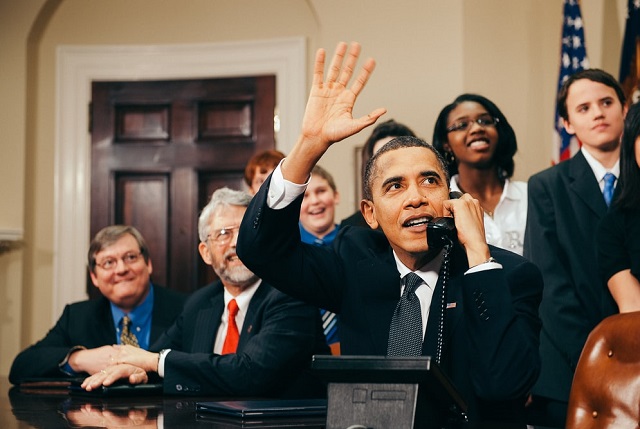 The new memoir from former President of the United States Barack Obama called “A Promised Land” is coming out this week. In it Mr. Obama has, of course, a great deal to say about many American politicians and world leaders. But since this publication is called Jewish Business News we will begin with Israel’s Prime Minister Binyamin Netanyahu.

Out on Tuesday, the book has a whopping 768 pages.

As President, Barack Obama clearly had a strained relationship with Binyamin Netanyahu. But to be fair so do most world leaders. And Israeli politicians, including Netanyahu’s own coalition partners, have been known to despise him and call him a liar. Many of the leaders in his own Likud Party simply quit.

Netanyahu’s defenders counter that he is simply doing what needs to be done to protect Israel from outside pressures to make concessions which would harm its security. As for his feuds with fellow Israeli political leaders, they would point out that coalition partners always complain about unfulfilled promises and the Likud leaders who left over the years did so because they knew that they could not unseat Netanyahu as their party’s leader.

As for President Obama, the Israeli political right loathed and renounced him for what they perceived as his anti-Israel policies. But was this fair of them? Barack Obama’s defenders would point out that his position on the Israel-Palestinian conflict was no different than that held by half of all Israelis themselves.

Their scorn for Barack Obama resulted from the fact that he did not share their views, and nothing more. Others would also point to the attacks on Obama by his opponents in America who said that his Muslim heritage meant that he hated Israel and was soft on fighting terrorism. They assert that people in Israel fell for what was nothing more than political propaganda.

So what does the former President have to say about Binyamin Netanyahu? President Obama understood and appreciated the Prime Minister’s concerns for Israel’s security. But Mr. Obama also characterized Mr. Netanyahu as being so self-righteous on the issue that he would use it to do anything to keep himself in office.

“Netanyahu’s vision of himself as the chief defender of the Jewish people against calamity allowed him to justify almost anything that would keep him in power,” writes President Obama.

But the former President does have some kind words for Israel’s Prime Minister. He describes Netanyahu as, “smart, canny, tough and a gifted communicator.” who could be “charming, or at least solicitous

Barack Obama explains why he feels that Israel is the side which needs to make concessions in the conflict with the Arab world. Describing Israel as the “stronger party,” President Obama sees it as “reasonable to ask Israel to take a ‘bigger first step’ and freeze construction in the West Bank,” among other moves.

As for the American Jewish community, specifically the pro-Israel lobby AIPAC, Barack Obama writes that he felt under attack, having been characterized as not sympathetic enough to Israel’s position. “On Election Day, I’d end up getting more than 70 percent of the Jewish vote, but as far as many AIPAC board members were concerned, I remained suspect, a man of divided loyalties.”

More than anyone else, I wrote my book for young people—as an invitation to once again remake the world, and to bring about, through hard work, determination, and a big dose of imagination, an America that finally aligns with all that is best in us. https://t.co/1yZrYWuckX

Part of the problem may have been the people who President Obama had in his circle who advised him on Israeli matters. This group included Jews, even orthodox Jews, and even some Israeli citizens. President Obama’s first chief of staff Rahm Emanuel is Israeli. His senior advisor David Axelrod is Jewish. And former writer for Israeli newspapers David Makovsky who also advised the President when he was in office is orthodox.

This might have led President Obama to believe that he was getting a clear Jewish perspective on Israel.

But these gentlemen all brought with them preexisting views and opinions of the Arab-Israel conflict. Makovsky, for example, wrote for the Hebrew daily Haaretz which is considered left-wing on the peace process and he himself has a reputation for opposing the policies of Binyamin Netanyahu’s Likud Party.

As for the general reception for “A Promised Land,” The New York Times highlights how Barak Obama feels that he was constricted by being America’s first Black President. “The tone that Obama strikes in lines like these is almost mournful,” writes the Times. “He shows how a certain kind of blunt candor seemed all but unavailable to him as the first Black president.”

Being black and called an Arab Muslim by his detractors as if it were an insult (he is neither), Barak Obama clearly has been judged differently for his Israel policies then a President Clinton or Biden would have been had they made the same decisions. African Americans and Jewish Americans have had a strained relationship, to say the least, for decades now.

CNN revealed some of the book’s other revelations having received an advanced copy of “A Promised Land.”

On Sarah Palin, the former Alaska governor and John McCain’s running mate in 2008, the former President writes that , “on just about every subject relevant to governing the country she had absolutely no idea what she was talking about…like a kid trying to bluff her way through a test for which she had failed to study.” CNN describes Obama’s characterization of Palin as tantamount to calling her a “proto-Trump.”

On his former Vice-President Joe Biden he writes, “I liked the fact that Joe would be more than ready to serve as president if something happened to me — and that it might reassure those who still worried I was too young.”

“What mattered most, though, was what my gut told me — that Joe was decent, honest, and loyal. I believed that he cared about ordinary people, and that when things got tough, I could trust him. I wouldn’t be disappointed.”

And of course “A Promised Land” has plenty to say about Donald Trump, the birther nonsense, John McCain, President Obama’s marriage and much more. But you will need to buy the book to see what it says.