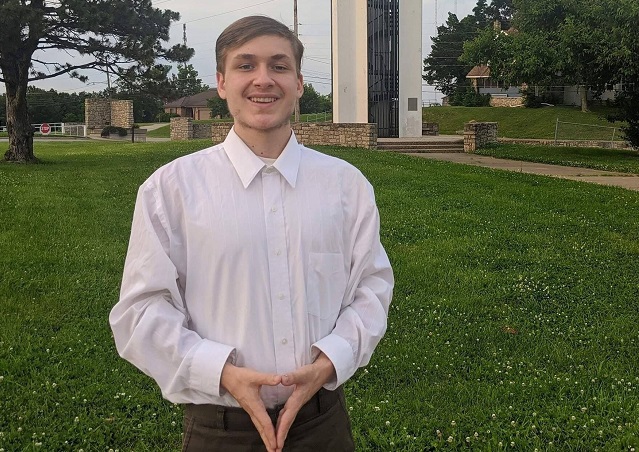 He’s in, then he’s out, and now Aaron Coleman is back in. The nineteen-year-old Jewish Kansan college student announced that he would be taking his seat in the Kansas State House after all – if he wins the general election. Aaron Coleman had previously announced his withdrawal as the candidate after it was revealed that he sent what are described as harassing text messages to girls when he was in middle school.

On Monday, August 17th, Coleman won the Democratic primary for the 37th Kansas State District by a razor-thin margin. He succeeded in unseating the seven-term incumbent Kansas State Rep Stan Frownfelter. The Democratic nominee is considered a lock on winning the general election in a heavily Democratic district. But then he backed out after incidents of his engaging in online bullying, blackmail and revenge porn were made public. Coleman described his behavior as that of “a sick and troubled” 14-year-old. He told AP, “I ran to talk about how to make Kansas better for working people. I never expected I would win.” Lauren Fitzgerald, a spokeswoman for the Kansas Democratic Governor Laura Kelly stated, “He is not fit to serve in the Legislature.”

Kansas City TV station KSHB 41 reported that Kansas State law allows a candidate to drop out because of a, “severe medical hardship on the nominee or the nominee’s immediate family.” Aaron Coleman tweeted on Sunday that his father was sick. Coleman also said that he did not expect that his entire life would be put under a microscope, including what he did in middle school. This may sound naïve coming from any political candidate, but he is just 19 years old.

But now Aaron Coleman is back in it.

Coleman released an extend statement on Twitter explaining his decision. “From the moment I won, I have endured sustained attacks. I obviously did not expect to have my entire personal life, especially what I did in middle school, put under that kind of national microscope,” he wrote.

Many point out that the young man should not be judged today for the stupid things which he did as a thirteen and fourteen year old boy. But others will point out that, in light of the #Me Too movement and the need to be more aware and serious on these matters, his age at the time does not matter. But in changing his mind Mr. Coleman pointed out that should he drop out then his opponent, the incumbent, would by law be the party’s nominee.

So why is this a problem? Aaron Coleman explained in his Twitter statement that “I grew up in poverty and today I work as a dishwasher,” describing how he works hard and represents the average person. “When I was a child I lived in a broken home and there were many times when there was no food in the house and I went hungry. My story is similar to that of countless others in my district.”

Counting himself a populist in contrast to the incumbent Aaron Coleman added that, “voters do not throw out a 7-term incumbent for a person like myself unless they are deeply frustrated with their lack of representation and demanding a change.”

“My withdrawal would immediately return to power the same corporatist, out-of-touch 7-term incumbent that voters just rejected. They did not only vote for me but they voted for my platform and for change for our community,” he added. “We cannot undo democracy because I am a flawed individual who has made mistakes. That is not fair to those voters. They deserve to have a choice this November.”

Aaron Coleman is decidedly liberal supporting abortion rights and Medicare for all.