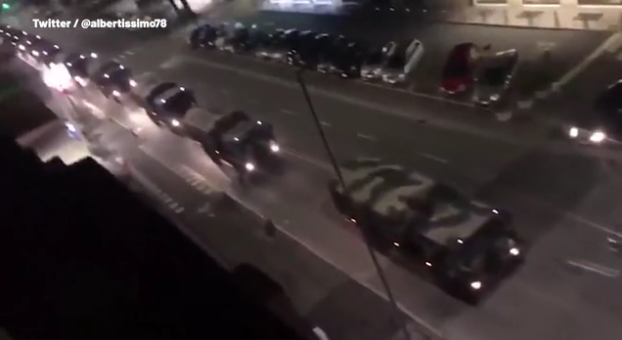 New images coming from Bergamo in Italy illustrate the dimensions of the tragedy currently facing the boot country: pictures show a convoy of military vehicles summoned to evacuate from a morgue in a local cemetery. The bodies of people who died of the Coronavirus will burn.

Bergamo is a city northeast of Milan, in the Lombardy region. The area where the number of dead and infected people in Italy is the largest. The death toll in Italy overtakes China to more than 3,405 on Thursday while Spain’s death toll surges past 1000.

The Italian army sent 50 troops and 15 trucks to the city on Wednesday to take bodies to less overwhelmed provinces.

Authorities have been forced to place the coffins in the church in the cemetery. Yesterday they began to evacuate other areas of the country. The first destination being Modena, Emilia-Romagna province.

The Italian army takes coffins away in Bergamo as morgues and cemeteries struggle to cope with the number of #coronavirus deaths.
Latest in Europe: https://t.co/sAASNXPTjz pic.twitter.com/qaIcXgpXSj

According to the World Health Organization (WHO) more than 209,000 people have been infected by the virus globally and more than 8,700 have died, according.

Yesterday Italy Attorney General Attilio addressed the residents in a desperate plea: “Unfortunately, the number of infections does not decrease, it continues to be high. Soon we will no longer be able to treat anyone who is ill. Stay home.” He threatened to take stricter steps: “Friends, I am currently saying things politely, but a little longer and there will be no choice but to change the tone, because if it does not go well it should be a little more aggressive. Every departure from home is a danger to you and others.”

Although an absolute majority of Italians respect the quarantine provisions that have been in place since March 9 and are not allowed to leave the home except for urgent needs. The Italian Interior Ministry reported yesterday that on March 17-11, authorities were forced to take legal action against more than 40,000 people who violated the quarantine.

The shocking center of the COVID-19 crisis in Italy

In one case, in Sicily, police seized a person infected with the virus. A criminal case has now been opened against him and he may be sent for up to 12 years in prison. In northern Italy, a man underwent plastic surgery on his nose – and had not previously reported to the medical team that he had symptoms associated with the coronavirus. Later it became clear that he was infected.

In this article:Italy, Finance, Coronavirus