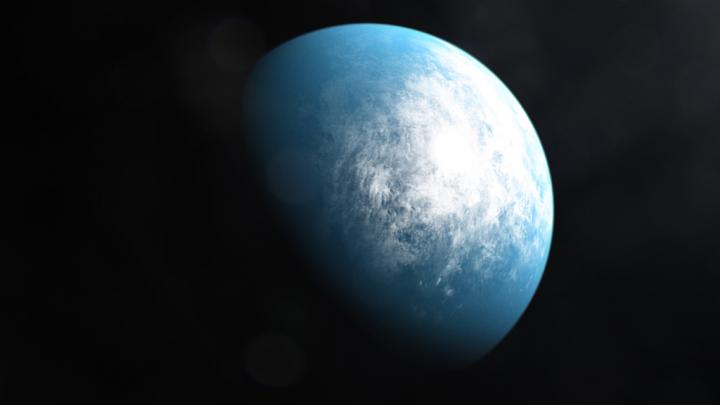 TOI 700 d, is one of only a few Earth-size planets discovered so far in the range of distances where conditions may be just right to allow the presence of liquid water on the surface.

TOI 700 is a small, cool M dwarf star located just over 100 light-years away in the southern constellation Dorado. It’s roughly 40% of the Sun’s mass and size and about half the surface temperature. At the moment it did not identify whether the planets have atmospheres and, if so, how they organize. Because TOI 700 d is tidally locked to its star, the planet’s cloud formations and wind patterns may be strikingly different from Earth’s.

While the exact conditions on TOI 700 d are unknown, scientists can use current information, like the planet’s size and the type of star it orbits, to generate computer models and make predictions.

The model atmosphere contains a deep layer of clouds on the star-facing side. Another model depicts TOI 700 d as a cloudless, all-land version of modern Earth, where winds flow away from the night side of the planet and converge on the point directly facing the star.

The modeling team, led by Gabrielle Engelmann-Suissa, a Universities Space Research Association produced simulated spectra for the 20 modeled versions of TOI 700 d.  “It’s exciting,” Engelmann-Suissa said, “because no matter what we find out about the planet, it’s going to look completely different from what we have here on Earth.”

The star was originally misclassified in the TESS database as being more similar to our Sun, which meant its three planets appeared larger and hotter than they really are. Several researchers, including Alton Spencer, a high school student working with members of the TESS team, identified the error.

“When we corrected the star’s parameters, the sizes of its planets dropped, and we realized the outermost one was about the size of Earth and in the habitable zone,” said Emily Gilbert, a graduate student at the University of Chicago. “Additionally, in 11 months of data we saw no flares from the star, which improves the chances TOI 700 d is habitable and makes it easier to model its atmospheric and surface conditions.”

The innermost planet, called TOI 700 b, is almost exactly Earth-size, is probably rocky and completes an orbit every 10 days. The middle planet, TOI 700 c, is 2.6 times larger than Earth — between the sizes of Earth and Neptune — orbits every 16 days and is likely a gas-dominated world. TOI 700 d, the outermost known planet in the system and the only one in the habitable zone, measures 20% larger than Earth, orbits every 37 days and receives from its star 86% of the energy that the Sun provides to Earth. All of the planets are thought to be tidally locked to their star, which means they rotate once per orbit so that one side is constantly bathed in daylight.

Because TOI 700 is bright, nearby, and shows no sign of stellar flares, the system is a prime candidate for precise mass measurements by current ground-based observatories. These measurements could confirm scientists’ estimates that the inner and outer planets are rocky and the middle planet is made of gas.

“Discovering TOI 700 d is a key science finding for TESS,” said Paul Hertz, astrophysics division director at NASA Headquarters in Washington. “TESS was designed and launched specifically to find Earth-sized planets orbiting nearby stars. Planets around nearby stars are easiest to follow-up with larger telescopes in space and on Earth.”