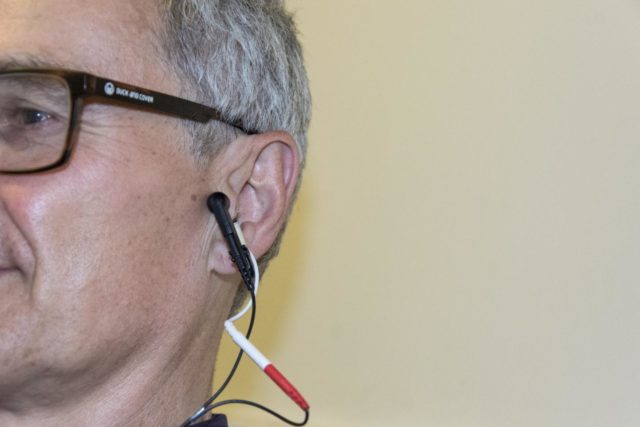 ‘Tickling’ the ear with a small electrical current could rebalance the autonomic nervous system and potentially slowing down aging, according to new research.

Scientists at the University of Leeds found that a daily therapy for two weeks delivers a small, painless electrical current to the ear, led to improvements, including a better quality of sleep, mood, and life as general.

The therapy called transcutaneous vagus nerve stimulation was tested on 29 healthy people, aged 55 and up. Each one of them received the therapy (tVNS) for 15 minutes every day, over two weeks. The tVNS sends tiny currents of electricity into the ear that goes down along the body’s nervous system.

Researchers found that individuals who displayed the greatest body imbalance at the start of the study experienced the most improvements afterwords.

Lead author Dr. Beatrice Bretherton said: “The ear is like a gateway through which we can tinker with the body’s metabolic balance, without the need for medication or invasive procedures. We believe these results are just the tip of the iceberg.

The research published in the journal Aging, suggests that the ‘tickle’ ear therapy has the potential to protect people from chronic diseases such as heart disease, high blood pressure, and atrial fibrillation. Moreover, it could help people age more healthily, by recalibrating the body’s internal control system. By using the ear, people don’t need to use medication or invasive procedures.

The nervous system controls many of the body’s autonomic functions which don’t require to think about, such as digestion, heart rate, breathing, and blood pressure.

As we age, and when we are fighting diseases, the body’s balance changes in a way that the sympathetic branch begins to dominate and imbalance the bodywork. This makes the body more susceptible to new diseases and leads to the breakdown of healthy function as we are aging.

The therapy led to an increase in parasympathetic activity and a decrease in sympathetic activity, rebalancing the autonomic function towards that associated with healthy function. In addition, some people reported improvements in measures of mental health and sleeping patterns.

Past research has looked at the possibilities of using electrical stimulation of the vagus nerve to tackle depression, stroke, tinnitus, heart conditions, epilepsy, and obesity. Those experiments required surgery to implant electrodes in the neck. This method is expensive and has some risks of side effects.

But, there is one small branch of the vagus nerve located in the skin of specific parts of the outer ear that can be stimulated without surgery.

Previous research at Leeds has shown that applying a small electrical stimulus to the vagus nerve at the ear, improves the balance of the autonomic nervous system in healthy 30-year-olds.

The researchers suggest that further studies need to understand what are the long-term health effects of tVNS, as this study involved a small number of participants over a short time period.