NASA’s Mars InSight lander has likely recorded for the first time ever an “earth” quake on Mars. Early analysis has confirmed that the seismic tremors faint but unmistakable coming from deep in the belly of the red star, as opposed to being caused by forces above the surface, such as wind.

Now seismologists are hard at work to narrow down precisely what caused it. The new seismic event was too small to provide solid data on the Martian interior.

The Martian surface is extremely quiet, allowing InSight’s specially designed seismometer, to pick up faint rumbles. In contrast, Earth’s surface is quivering constantly from seismic noise created by oceans and weather. An event of this size in Southern California would be lost among dozens of tiny crackles that occur every day.

NASA said the quake was recorded on April 6 by the sensitive sensors of the US space agency, and scientists are still analyzing the findings from Mars along with three more seismic actions taken by the lander.

The French scientist in charge of the experiment, Philippe Logonne, said it was exciting that there was finally proof that Mars was still active seismic. “Mars is almost as geologically inactive as the Earth and like our moon, it lacks tectonic plates,” said the scientist.

InSight has two main scientific tools: one, a heat test that will weigh about 5 meters into the ground, and the other, a device for measuring vibration in the ground. The observations can provide quite a bit of information about the structure and composition of Mars, and also lead to a better understanding of how rocky planets are formed and developed, according to scientists involved in the project. 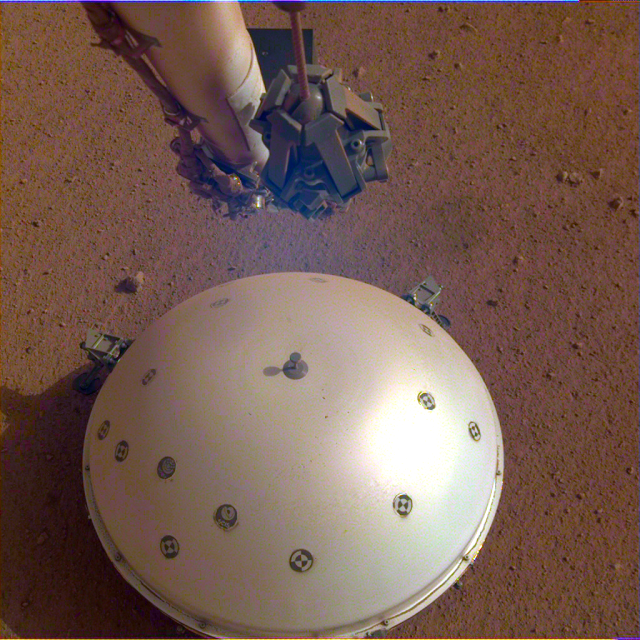 The mission was named Insight Exploration using Seismic Investigations, Geodesy and Heat Transport, which means “internal exploration through seismic analysis, geodesy and heat transfer”. NASA defines the scientific task as examining a patient’s vital signs: the seismic temperature (heat transfer) and the reflexes – that is, the vibrations of the planet – all of this will be done using the array of devices in the small lander, which is about 1.5 meters (without the solar panels) -360 pounds.

“The Martian Sol 128 event is exciting because its size and longer duration fit the profile of moonquakes detected on the lunar surface during the Apollo missions,” said Lori Glaze, Planetary Science Division director at NASA Headquarters.

NASA’s Apollo astronauts installed five seismometers that measured thousands of quakes while operating on the Moon between 1969 and 1977, revealing seismic activity on the Moon. Different materials can change the speed of seismic waves or reflect them, allowing scientists to use these waves to learn about the interior of the Moon and model its formation. NASA currently is planning to return astronauts to the Moon by 2024, laying the foundation that will eventually enable human exploration of Mars.

In this article:NASA, Mars, Finance