On the eve of the 2015 elections, Benjamin Netanyahu decided to take part in a studio recording of Israel’s satirical TV program “Eretz Nehederet” (Wonderful Country). The popular show had hosted quite a few politicians, and Netanyahu and his associates knew that softening his image would be good fo him. It gave Netanyahu a chance to take a break from frightening Israelis about the dangers of Iran, and let him show off his smile and the ability to laugh at himself.

But Netanyahu does not have a particularly well-developed sense of humor, let alone self-mockery, and preparing for a performance on the show meant intense work. For several days, Netanyahu practiced diligently. In his simulations, his staff played the role of interviewer, the famously deadpan host Eyal Kitsis, and made it clear to Netanyahu that his talented impersonator Mariano Idelman would be seated next to him in the studio.

This was not Netanyahu’s first appearance on the program, but in a heated race against Zionist Union’s Isaac Herzog and Tzipi Livni, it was of particular importance. Netanyahu went to boot camp for the show, and his staff were in contact with its production team to finalize every detail and ensure that their candidate was at his peak.

There was just one question Netanyahu’s team forgot to prepare for: They never dreamed that of all the programs in all of the world, this successful entertainment show would be the one to ask the prime minister about what he wanted his legacy to be. They just did not see it coming, but Kitis asked. He mentioned David Ben-Gurion as the man who established the Jewish state and asked what Netanyahu would be remembered for. The prime minister took so long to reply that Kitsis was forced to repeat the question. “How will you be remembered?” he asked. And Netanyahu replied: “As Israel’s security guard.” The audience applauded. It was an authentic answer, from the gut, without preparation or refinement. 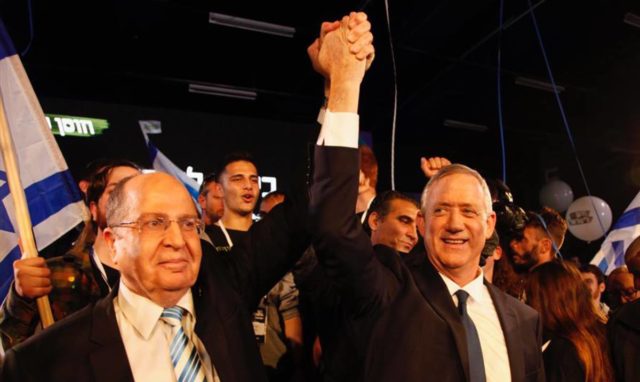 Netanyahu has been running the same campaign for 23 years, in seven election cycles. His greatest hits include claims that his rivals would divide Jerusalem, split the holy city, give half of the capital to the Palestinians, and also be forced visit the Western Wall in armored vehicles (because they would have divided Jerusalem). En route, he went via Iran, more Iran and 2015’s ” Arabs flocking to the polls.”

Netanyahu is always the same Netanyahu, and the campaign is always the same campaign. Even if this time he has decided to play the card of “victim of investigations, the police, the media and the left,” the old familiar “Mr. Security Guard” will make an inevitable appearance. It’s only a matter of time, for this is what Netanyahu knows how to do best.

Yair Lapid and Avi Gabbay have no response to this campaign. They tried to flank him on the right, tried to criticize him from the left, but to no avail. Netanyahu is Teflon. In every poll, Netanyahu is always ahead of Labor leaders and Lapid’s Yesh Atid party. The joint electoral run by former IDF chiefs Benny Ganz and Moshe Ya’alon will be the first since 1999 to try to challenge him on this platform and present with a relevant security alternative. Ganz and his people understand that in order to beat the Netanyahu juggernaut, they had to neutralize his power. Netanyahu’s attack on his biggest rival has already begun, with claims that “the soft, weak and left-wing Gantz will not protect Israel’s security.”

When Netanyahu ran against generals in the past, he lost. He lost against Ehud Barak in the 1999 general elections and against Ariel Sharon in the 2002 Likud leadership contest. The 2019 model, however, is far more experienced and determined. Gantz and Ya’alon saw that they needed to unite to pose a real threat, and with Gabi Ashkenazi on board, Netanyahu will be facing a triumvirate of former army chiefs that cover a broad spectrum of Israeli society. Their party cannot be dismissed as left-wing (because of Ya’alon), nor is it of the Western European elite (because of Ashkenazi). And most importantly, it makes a mockery of Netanyahu’s claim that he alone is “Israel’s security guard.”

To make this happen, some people will have to put their egos to one side (which will not be easy), and recognize Netanyahu’s clear advantage in the election campaigns he has run and won. The voters’ sense of security is always a strong card to play in Israel’s crowded political field, and this is just as true for the upcoming elections. Whoever can sway public opinion on this issue will be the one to take home the ultimate prize.