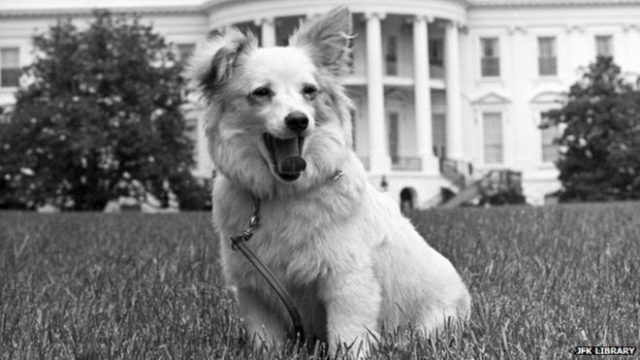 A Russian takeover of the United States may not be imminent, but someone has to take over the government which is not functioning the way good governments should.

Orson Wells’ broadcast of The War of the Worlds which was mistaken as an invasion by many Americans. There is no “invasion” at the Southern border. The small amount of truth should not poison the effort to provide asylum to people. And Trump is being unreasonable and he and his base have created This War of Two Worlds.

Pushinka was a Russian puppy given to Caroline Kennedy. The government we have now is going to the dogs in another way.

There were friendly words between John F. Kennedy and the Russian envoys at that time, but among American politicians who used the communist card things were quite different. And there were those who could be convinced easily enough to pass the nuclear test ban treaty between the United States and the Soviet Union. Kennedy, remember, made a deal with the devil to help Dwight D. Eisenhower’s friend Sherman Adams and called upon Senator Dirksen to help him get votes for that treaty.

Perhaps Kennedy didn’t have to do anything unethical at that moment. The vote in the Senate was 80-19. Keep in mind that only two-thirds is needed for treaties.

Kennedy won a nuclear test ban treaty and a wheat deal with Khrushchev and Republican leaders complained about the wheat deal. Both Kennedy and Khrushchev anticipated more agreements, giving hope to the end of the Cold War. Foreign Minister Andrei Gromyko walked around with Kennedy and they talked about the great progress and change in the political atmosphere. And Gromyko had to watch out for Ambassador Dobrynin the way that Kennedy had to watch out for Dean Rusk and others as they did not want to be overheard.

Kennedy had to worry about things related to his past. In a previous article in Jewish Business News, I wrote about a woman that had been sent out of the United States because Kennedy’s relationship with her was too hot to handle just then. And there was more of course.

A young John F. Kennedy had had an affair with a Danish woman well known in Nazi circles and Kennedy feared J. Edgar Hoover coming down on him the way Trump fears the Mueller Investigation. What helped Kennedy was that his father and Hoover were friends and this was another reason to keep Hoover on. Fear of leaks then and fear of leaks today. We need leaks!

Unfortunately for the progress of our nation right now, it has been reported that there was much more to Trump and Russia besides the meeting in Trump Tower. Just the other day a resident of Long Island told me on the phone that the Russians have been doing things in our elections for decades and did not favor one side or the other. This has to be quite a popular refrain, especially among those supporters of Trump who did not take the time to follow the investigation closely and read books about what was going on.

Now we know that there were 100 contacts between Trump aides and the Russians. And a made-up story by Trump and his supporters for each one. The is the nature of liberty in America right now.

For the moment the Trump Wall and the government shutdown are big news and rightfully so (because of the shutdown). Here are partial comments made by people on Long Island with a few comments that I have made.

“Fixed fortifications are monuments to the stupidity of man. If mountains and oceans can be overcome, anything made by man can be overcome.” Unfortunately the man who said that never got a chance to meet Donald Trump. He died twelve days after an accident in Europe in December 1945 and his name was General George Patton. But you have to know by now that Trump knows more than all generals.
Do we leave our houses unlocked?

A country without borders is not a country at all. Well I guess we have never been a country is my own response.

Walls work at prisons and the White House. Is Trump in a
prison already?

Every politician should remove the walls around his house or gated community.

Please remove the front door from your house.

All for the wall.

Do Democrats leave their doors and windows open?

We give billions of dollars to other countries. Why not take care of ourselves?

I have been telling people that Americans do not think deeply and those are some great examples. My fellow Americans I ask not what your country can do for you but what you can do for national safety instead of a war on national security.

I wish I could bring General Patton back to life if only so that he, Donald Trump, Michelle Malkin, Rush Limbaugh, and Ann Coulter could appear together at the Trump Wall on display where they will climb a painter’s ladder to show all Americans just how simple it is to get over the wall. And those experts that Trump used for his address to our nation will also climb the ladder.

I just wrote to the NY Times and other news media sharing a letter that I sent to Congressman Pete King of New York detailing my views about Trump’s Wall and citing the need for panic buttons in our nation’s schools after we all witnessed and learned a lot about the Parkland Massacre. I wrote that letter to Pete King to accuse him and expose him. Now I hope that I will hear from the NY Times and I’m not holding my breath.

I also notice that at this time some people are writing that we should do something else with the wall money that Trump and Republicans badly want.

One Republican, by the way, suggested that Trump’s wealthy friends pay for the wall.

Khrushchev gave US a cute dog and Putin gave US Trump.

Kennedy lost his life in Texas in 1963 and now Trump has destroyed himself in Texas at the border. Kennedy’s loss of life was followed by a worsening of the Cold War as Lyndon B. Johnson led our nation into the War in Vietnam. Hopefully our nation will not be led into war right now by Trump, as another act of desperation.

Trump’s national security ploy hardly compares with the Kennedy who helped defuse the Cuban Missile Crisis and who considered war a “modern horror” which was his biggest concern. Kennedy fought in World War II and lost his brother Joe in an attack in Europe.

Trump knows bankruptcies and little else. Even his famous deal-making has failed most of the time. But between Twitter and television, he still has lots of Republican support for the greatest crisis of his time, the wall.

If you read the literature on the border, you will see that even a man fifty times more intelligent and powerful could not build a wall with all the legal barricades that exist. This is another con job.

I await the publication in part or in total of my letter to Congressman Pete King. He can run but he cannot hide from it. Let’s us see what he answers!