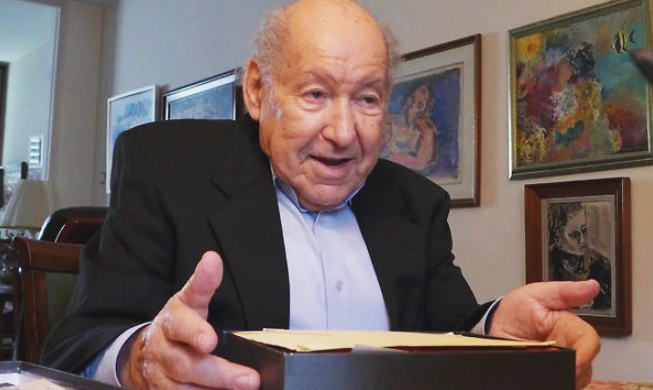 “I am not a person who loves vengeance, but this is certainly the sweetest revenge possible against the Nazis,” says 93-year-old Holocaust survivor Solomon (Sally) Perel, who has recently returned to the northern German town where he spent 3.5 years as a member of the Hitler Youth, 73 years after World War II. This time, however, he was there to attend a festive ceremony in his honor after one of the city’s schools was named after him—the Comprehensive School of Sally Perel.

Perel was born in the town of Peine in Lower Saxony to a Jewish family that emigrated from Russia. When the Nazis came to power and passed the Nuremberg Laws, the family’s shoe store was looted and Solomon was expelled from his school. This prompted the family to move to the Polish city of Łódź in 1935.

After the German invasion of Poland, Solomon, along with his brother Yitzhak, escaped to the Soviet part of Poland, where he was placed in a Komsomol-run orphanage, while his brother decided to continue to Vilnius in Lithuania.

When the Nazis invaded the Soviet Union in 1941, Solomon escaped the orphanage but was eventually captured by a German army unit. But thanks to his fluency in the German language, he managed to convince his captors that his name was Josef Perjell, and that he was a German citizen living outside Germany. 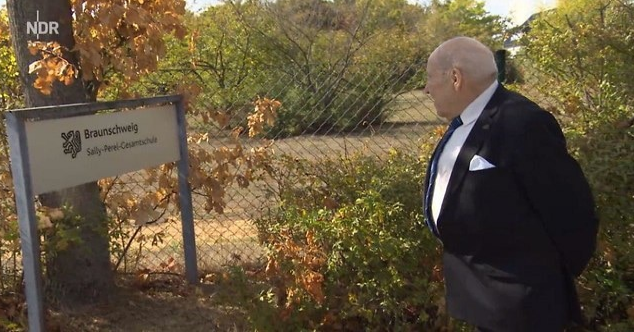 Because he was still a minor, he was enrolled into the Hitler Youth boarding school in Braunschweig, a city in northern Germany, where he spent 3.5 years. He was in constant danger because he was a circumcised Jew and had to hide his real identity throughout his time there.

“I was there from the age of 16.5 until the age of 20. I lived there using a made-up name and a false identity, so no one would find out I was a Jew. In boarding school, I attended classes on racial theory and went through pre-military prep. I never showered with other students, so they wouldn’t find out I was circumcised, or I showered while facing a wall or while wearing underwear. I was creative,” Solomon explains.

“Fortunately, no one ever suspected me, as had they ever suspected me, it would’ve ended very badly for me. Fortunately, they also never asked me during medical examinations why I was circumcised. That place symbolizes the lion’s den for me. Every night I went to sleep hoping my identity would not be uncovered,” the 93 year old continues.

Toward the end of the war, Hitler ordered all the Hitler Youth members to enlist, and Solomon was drafted into the army’s infantry, where he was a bazooka operator. Fortunately for him, his unit quickly fell into the hands of the US military. 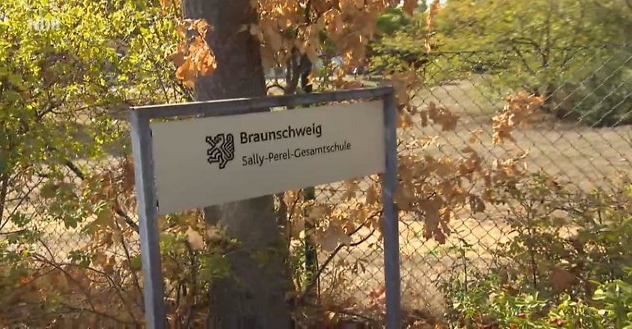 “Fortunately, I didn’t manage to start fighting. And even if I had, I would not have shot at Americans,” he says, adding that because he was a junior conscript soldier, he was released and not taken as a prisoner of war.

He later reunited with his brother Yitzhak and learned of his parents’ death. They could not find their sister, who fled to Russia.

After the war ended, Solomon reclaimed his Jewish identity and briefly served as an interpreter in the Soviet Army. He immigrated to Israel in July 1948, enlisted in the newly-formed IDF, and fought in the War of Independence.

Many years later, he wrote an autobiographical book in German, which was later translated into Hebrew and published in 1991 under the title: “Ich war Hitlerjunge Salomon” (“I Was Hitler Youth Salomon”).

Nowadays, Solomon Perel spends his time retelling his life story all around the world, working to deepen awareness of the Holocaust. He also frequently meets with delegations brought to Israel by the Foreign Ministry. He has a wonderful sense of humor and a rare ability to charm an audience.

In early September, Solomon received an email from the principal of a school in Braunschweig, telling him it was decided to name the school after him. Over 1,000 students aged 5 to 13 attend the school.

The decision was approved by the school board and passed unanimously by the members of the city council—including the representatives of the far-right Alternative to Germany (AFD) party. 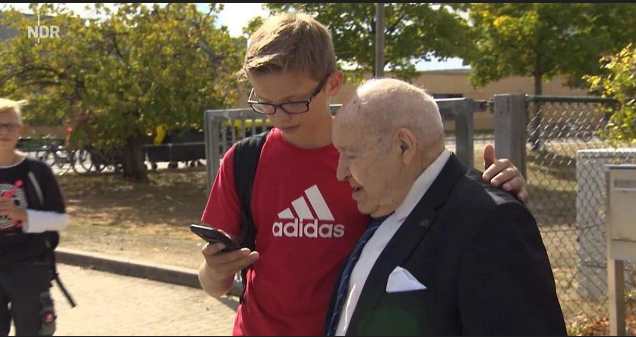 “This is the first school in Germany named after a Jewish Hitler Youth member,” Perel says.

Perel was joined at the ceremony in Braunschweig by his two granddaughters and his niece, Naomi Barkin, who also spoke on behalf of the family.

Solomon was met with a lot of love at the ceremony. When he entered the hall, the crowd stood up and cheered him on. Some students even approached him and asked to take selfies with the 93-year-old.

The crowd jumped to its feet again after Solomon’s speech, with the standing ovation lasting for several minutes. The principal then presented Perel with a key to the school.

Solomon also visited what remains of the Hitler Youth boarding school, where he spent over three years of his life.

“Everyone dreams about something, but this is beyond anything I have ever dreamed of. It is a great honor for me,” Holocaust survivor exclaimed in his speech.

“I am very active in Germany on the subject of the Holocaust, and this is the highlight of my work. This is a victory for the will to live over evil. I fought and won the right to live—which is what the Nazis tried to deny me as a Jew,” he concluded.

In this article:Finance, Holocaust survivor