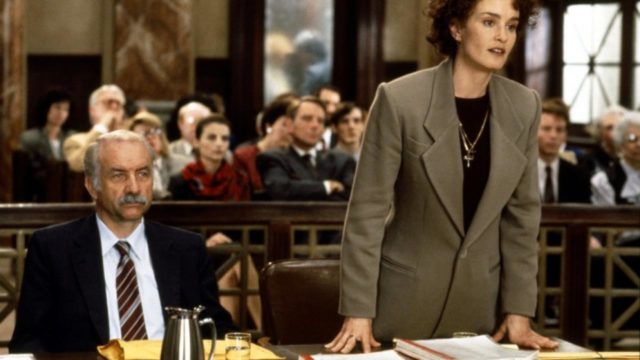 It ain’t over till the fat lady sings.

It ain’t over till it’s over (Yogi Berra NY Yankees great).

And so it is with great stories (true and fiction). Perhaps you have seen the movie “Twelve Angry Men” still considered one of the best movies ever made. A jury seems ready to find a Puerto Rico guilty of murder and through time and the right questions asked in the jury room the Puerto Rican is set free. Latino Lives Matter. Whether it is following a particular explosive case in the news or a trial or investigation, we need time and people to ask the right questions. Sometimes we need more time than a week, which you know is the time that Trump has set aside for the Kavanaugh investigation by the F.B.I. I can imagine Yogi Berra saying that the F.B.I. would need more time just to warm in the bullpen.

Communities need to watch scenes from the Music Box, an important movie by Constantin Costa-Gavras. He and I talked once when he called me Canada where he was working on Betrayal. It was really one of the great moments of my life to pick up the phone and talk to him. He told me where he lived and to keep in touch and I will forever be grateful for that moment. The truth of any statement is based on accuracy. Do I remember what day of the week it was? Do I remember what year it was? Do I remember any of the other things that people in Congress have asked the accuser of Brett Kavanaugh as it pertains to Costa-Gavras and that phone call? I could have forgotten or even never recalled from the beginning any of these things, but would suggest that I am not telling the truth? An actually walked to the street where he either lived or had an office and when I was in Paris and Vincennes on a trip, I walked over to his office near where I was staying and I could find out because I have already seen it. So your truth is the essence of the investigation, not whether people that someone is telling the truth. Truth by proof.

The Music Box mentioned in the title starred Jessica Lange and it took place in Chicago. This was a story growing out of the Holocaust. Jessica Lange is a lawyer who defends her own father who was accused of crimes. She, naturally, did not believe what others said about her father. He tells her that he was a farmer in his youth who joined the military-gendarmes as a clerk. She goes to visit Magda Tibor in Budapest, Hungary. The trial was already over and there was time for her to get the truth, something that Trump himself is not very good at. The Chicago Police had sent Magda Tibor the possessions of her brother who had been killed in an accident. Among the possessions was a simple pawn ticket.

The Music Box is a must see.

Ann Talbot played by Jessica Lange wants the truth to be known. The pawn shop had the truth. Maybe weeks have gone by and she had not midterm election to put up with. Her father blamed everything on the Communists. Here we hear people blame things on the Marxists. These are Conservatives in the media and government who should say to us (We the People that Trump mentioned in his speech at the United Nations), take your time go get to the truth, but keep us updated. There is time to appoint a Supreme Court Justice and the Republicans should be optimistic with such a so-called amazing president. The truth is optimistic except when there are plots against the truth. Ann Talbot went to the pawn shop and mailed the photos inside the music box to the Justice Department. I fear that a large portion of our nation might say oh no as a knee jerk response to the current situation with Kavanaugh. People just cannot believe the truth and clearly far too many people are believing the lies and sound bites that they hear.

Whether it is a trial brought about by a police killing, the killing of an innocent person shot in the back, or the killing of a police officer, we need to have the proof in front of us. Whether it is the investigation of a candidate for the Supreme Court or the impeachment of a president, we need proof. I have recommended the Music Box and the Dreyfus Affair to important people in power without even receiving a reply. And that is not good. People in power are dividing us more by not providing people with the tools to understand. Maybe Kavanaugh and his family are suffering for no good reason or for some powerful reason that is part of his past. James Comey tells us that the F.B.I. is staffed by people who want to get at the truth, not alternative facts or truths. The White House circus has to stop.

Now we can look at the fusion of the Music Box and Dreyfus Revisited: A Current Affair. How do we get at the truth? We fight for the truth and the right people have to do the investigating. I doubt that this has registered on many of those who support and oppose Kavanaugh. Trump will be seen in the video of the Dreyfus Affair, but never mentioned. Pay careful attention.