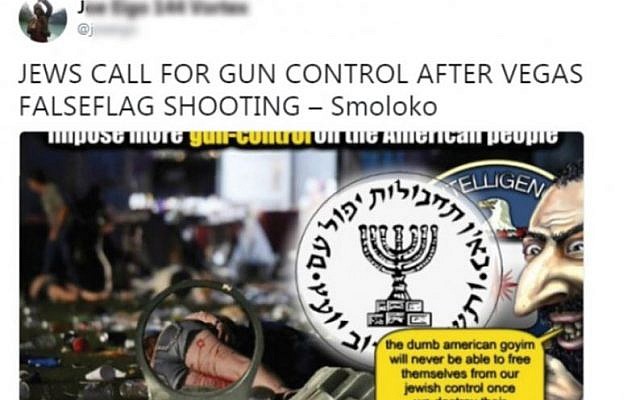 Twitter users posted an about 4.2 million antisemitic tweets in English alone over a one-year span, according to a report released by the Anti-Defamation League (ADL), adding concerns that digital platforms have become a breeding ground for expressions of Jew-hatred.

In a new report, the ADL’s researchers found that the tweets were sent from roughly 3 million Twitter users from January 2017 to January 2018. The average number of Antisemitic tweets per week was 81,400.

The report did not search for non-textual expressions of anti-Semitism, like anti-Jewish memes or videos, but in many cases, they became part of the study when they were posted in conjunction with the Antisemitic text.

“This new data shows that even with the steps Twitter has taken to remove hate speech and to deal with those accounts disseminating it, users are still spreading a shocking amount of anti-Semitism and using Twitter as a megaphone to harass and intimidate Jews,” said ADL CEO Jonathan A. Greenblatt. “We hope this report will create a renewed sense of urgency among all social media providers that this problem is not going away and that they need to find innovative new ways to tamp down the spread of hatred online.”

“Algorithms and artificial intelligence will be key to identifying hate online, but human experts are needed to define the problem and, at least in the initial stages, to help the systems assess sentiment and eliminate false positives,” Greenblatt said. “Our experts created a data set of 55,000 tweets which were manually reviewed for the presence of anti-Semitism. We look forward to sharing our research and expertise with tech companies and academics as they work on this problem.”

The report included a series of policy recommendations for Twitter to combat anti-Semitism on its platform. The recommendations include ensuring a comprehensive Terms of Service agreement that clearly prohibits hateful content that is adequately enforced; using artificial intelligence to enhance efforts to flag content for review; ensuring users have an effective filtering option to decrease the chances they will encounter hate speech; and exploring external review and input by providing access to the platform’s data to independent researchers and members of civil society.