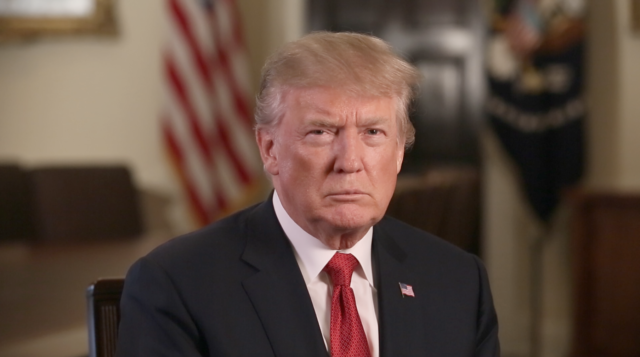 US President Donald Trump warned Russia Wednesday on Twitter of a forthcoming response to the suspected chemical attack in Syria. US president  blasting Moscow for standing by Syrian President Bashar Assad, ‘a Gas Killing Animal who kills his people and enjoys it!,’ declaring that missiles “will be coming.”

Responding to a Russian warning on Tuesday that any US missiles fired at Syria over the assault on a rebel enclave would be shot down and the launch sites targeted Trump wrote in a post on Twitter:

“Russia vows to shoot down any and all missiles fired at Syria. Get ready Russia, because they will be coming, nice and new and ‘smart!’”

“You shouldn’t be partners with a Gas Killing Animal who kills his people and enjoys it!” Trump said, referring Moscow’s alliance with Assad.

The Syrian government and Russia say the reports of a poison gas assault on the Syrian town of Douma are bogus. While Russia’s Foreign Ministry said in response to Trump tweet: “smart missiles should fly towards terrorists, not legal government.” Damascus and Moscow refer to rebels fighting Assad as terrorists.

Russia vows to shoot down any and all missiles fired at Syria. Get ready Russia, because they will be coming, nice and new and “smart!” You shouldn’t be partners with a Gas Killing Animal who kills his people and enjoys it!

Less than one hour later Trump tweet an offer to help boost Russia’s economy and sought an end to what he called an “arms race,” in an apparent diplomatic overture.

“Our relationship with Russia is worse now than it has ever been, and that includes the Cold War. There is no reason for this. Russia needs us to help with their economy, something that would be very easy to do, and we need all nations to work together. Stop the arms race?” Trump wrote on Twitter.

Our relationship with Russia is worse now than it has ever been, and that includes the Cold War. There is no reason for this. Russia needs us to help with their economy, something that would be very easy to do, and we need all nations to work together. Stop the arms race?

Meanwhile, Assad claimed big victory after the rebel group holed up in Douma agreed to withdraw from the town following the gas attack.

Moscow’s threat to shoot down US missiles came from the Russian ambassador to Lebanon, Alexander Zasypkin, who said he was referring to a statement by President Vladimir Putin and the Russian armed forces chief of staff.

Zasypkin also said that any hostilities with Washington should be avoided and Moscow was ready for negotiations.

But his remarks could raise fears of direct conflict for the first time between major powers backing opposing sides in Syria’s protracted civil war.

The World Health Organization said on Wednesday that 43 people had died in Saturday’s attack on the town of Douma from “symptoms consistent with exposure to highly toxic chemicals,” and more than 500 in all had been treated.

The Kremlin said on Wednesday it hoped all sides involved in Syria would avoid doing anything that could destabilize an already fragile situation in the Middle East, and made clear it strongly opposed any US strike on its ally.

Moscow and Washington stymied attempts by each other at the United Nations Security Council on Tuesday to set up international investigations into chemical weapons attacks in Syria.

Trump on Tuesday cancelled a planned trip to Latin America later this week to focus instead on talks with Western allies about possible military action to punish Assad over the suspected gas attack.

Trump had on Monday warned of a quick, forceful response once responsibility for the attack was established.

“If there is a strike by the Americans, then … the missiles will be downed and even the sources from which the missiles were fired,” Zasypkin, the Russian ambassador, told Hezbollah’s al-Manar TV, speaking in Arabic.

The Russian military said on March 13 that it would respond to any US strike on Syria by targeting any missiles and launchers involved. Russia is Assad’s most powerful ally and its devastating air power has helped him wrest back large areas of territory from rebels since 2015.

Zasypkin also said a clash between Russia and the United States over Syria “should be ruled out and therefore we are ready to hold negotiations.”

Earlier in the week, Russian Deputy Foreign Minister Mikhail Bogdanov said there was no threat of the situation in Syria spiraling into US-Russian hostilities. TASS news agency quoted him as saying he believed common sense would prevail.

Missile salvo from the Mediterranean?

Any US strike is likely to involve the navy, given the risk to aircraft from Russian and Syrian air defense systems. A US Navy guided-missile destroyer, the USS Donald Cook, is in the Mediterranean.

With tensions growing, pan-European air traffic control agency Eurocontrol warned airlines to exercise caution in the eastern Mediterranean due to the possible launch of air strikes into Syria over the next 72 hours.

Eurocontrol said that air-to-ground and cruise missiles could be used within that period and there could be intermittent disruptions of radio navigation equipment.

Aviation regulators have been stepping up monitoring of conflict zones since Malaysia Airlines flight MH17 was downed by a surface-to-air missile over Ukraine in 2014, killing all 298 people on board. Recent warnings have tended to be after military action has started, and so Eurocontrol’s pre-emptive notice suggests a heightening of regulatory scrutiny.

Both Russia and Iran, Assad’s other main ally, have warned his enemies against military action in recent days, underlining their commitment to the Syrian government they have armed and supported through years of conflict.

Ali Akbar Velayati, the top adviser to Iranian Supreme Leader Ayatollah Ali Khamenei, said during a visit to Damascus on Tuesday that an Israeli attack on an air base in Syria earlier this week would “not remain without response.”

In this article:Russia, Finance, Syria, US-Russia