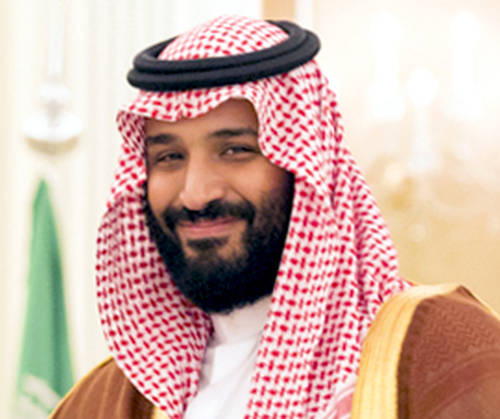 Saudi Crown Prince Mohammed bin Salman said on Monday that Israel has a right to exist in peace on its own land, attesting further to the informal warming of relations between Jerusalem and Riyadh, while insinuating that Iran’s supreme leader was worse than the Nazi dictator Adolf Hitler.

“I believe that each people, anywhere, has a right to live in their peaceful nation. I believe the Palestinians and the Israelis have the right to have their own land,” the crown prince said in an interview with The Atlantic, conducted by the paper’s chief editor Jeffrey Goldberg.

“But we have to have a peace agreement to assure the stability for everyone and to have normal relations.”

Saudi Arabia, the leading Sunni state in the Middle East, does not officially recognize Israel. However, in recent years, rumors have circulated indicating that the two countries have gone from eye to eye to shoulder to shoulder on a variety of issues, particularly on threats posed by Iran and its nuclear ambitions, and have warmed relations behind the scenes.

“We have religious concerns about the fate of the holy mosque in Jerusalem and about the rights of the Palestinian people. This is what we have. We don’t have any objection against any other people,” said bin Salman, who is considered to be a reformist.

When asked whether the threats posed by Tehran had contributed to bringing Israel and the Gulf state together, and whether in the absence of that threat he could imagine a situation in which he had other interests in common with Israel, the crown prince attributed other factors to the improved relations.

Goldberg also asked the prince whether he believed his country, in which anti-Semitic propaganda has traditionally been ubiquitous, has a problem with anti-Semitism.

“Our country doesn’t have a problem with Jews. Our Prophet Muhammad married a Jewish woman. Not just a friend—he married her,” he insisted.

“Our prophet, his neighbors were Jewish. You will find a lot of Jews in Saudi Arabia coming from America, coming from Europe. There are no problems between Christian and Muslims and Jews. We have problems like you would find anywhere in the world, among some people. But the normal sort of problems.”

The Middle East, he said, had been divided into a dichotomy of two camps, which he labelled the “triangle of evil” consisting of Iran, the Muslim Brotherhood, and Sunni terror groups, and an alliance of self-described moderate states that includes Jordan, Egypt, the United Arab Emirates, Bahrain, and Oman.

Last June, King Salman appointed his 32-year-old son bin Salman as crown prince, placing him firmly as first-in-line to the throne and removing the country’s counterterrorism czar and a figure well-known to Washington from the royal line of succession.

In a series of royal decrees carried on the state-run Saudi Press Agency, the monarch stripped Prince Mohammed bin Nayef, who had been positioned to inherit the throne, from his title as crown prince and from his powerful position as the country’s interior minister overseeing security.

On Tuesday, King Salman reiterated Saudi Arabia’s support for a Palestinian state after his son’s comments—a rare statement by an Arab leader.

The king also emphasised the need to advance the peace process in a phone call with US President Donald Trump on Monday night, made after Israeli security forces killed 16 Palestinians last week during the March of Return along the Israel-Gaza border, during which Gazans rioted. The majority of those killed were Hamas terrorists.

King Salman reaffirmed “the kingdom’s steadfast position towards the Palestinian issue and the legitimate rights of the Palestinian people to an independent state with Jerusalem as its capital”, state news agency SPA said.

The report did not refer to the comments by bin Salman in the interview published by The Atlantic.

Reuters contributed to this report.