One of the biggest problems for Snapchat is the fact that it is beaten at its own game by its most powerful competitor. Facebook introduced clones of Snapchat’s popular Stories feature to Instagram, WhatsApp and Messenger last year and earlier this year, respectively, and this copycat approach appears to be working out.

According to Facebook’s CEO Mark Zuckerberg, both Instagram Stories and WhatsApp Status, as the Snapchat-like features are called, now have 300 million daily active users or nearly double the total number of daily users Snapchat has. Like Snapchat, Instagram Stories, and WhatsApp Status let users apply filters and stickers to videos and photos that disappear after 24 hours.

You will find more statistics at Statista

When it comes to their social media preferences, U.S. teens are about as loyal as Brutus was to Caesar. Back in 2013, Facebook was still their social network of choice. In 2014, Instagram took the throne for a while before being replaced by Snapchat in 2016.

Now, in the fall of 2017, Snapchat is the clear number 1 for teens in the United States, with nearly half of the 6,000+ teenagers polled for PiperJaffray’s bi-annual “Taking Stock With Teens” survey naming it their favorite social platform. 24 percent of the teenage respondents called Instagram their favorite, while Facebook and Twitter are losing touch with the teen demographic.

So how do these numbers translate into actual usage? Are teenagers really abandoning Facebook in droves? Not quite, apparently. According to this year’s spring edition of PiperJaffray’s report, more than half of U.S. teens still use Facebook at least once a month. The same holds true for Twitter, which is used regularly by 56 percent of U.S. teens. Snapchat and Instagram hold their ground in terms of usage as well: both are used at least monthly by around 80 percent of young Americans. 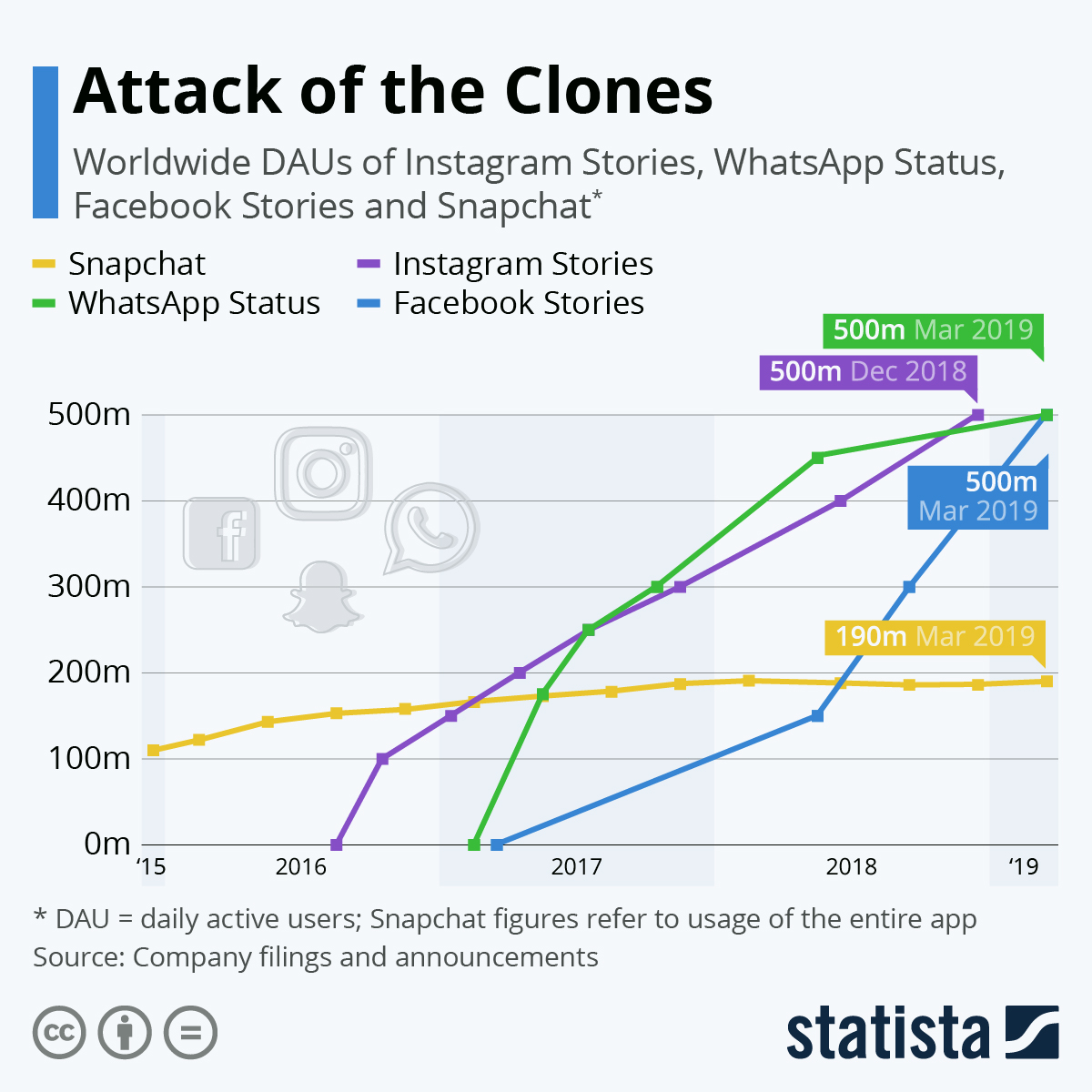 Instagram is a photo-sharing social networking service that enables users to take pictures and edit them with a selection of digital filters. As of June 2013, Instagram also started to offer video sharing. The service was initially released as an iOS app but is now also available for other mobile systems as well as online. As of September 2017, the social network reported more than 800 million monthly active users worldwide. The current Instagram penetration rate among internet users in the United States is 32 percent with the number of Instagram users in the United States projected to surpass 95 million users in 2020.

Many users follow celebrities on Instagram to gain a glimpse into their glamorous lives, following a similar usage pattern to microblogging service Twitter. The most-followed celebrities on Instagram include Taylor Swift, Kim Kardashian and Beyoncé. The possibilities of online self-expression and the display of wealth through photographs are attractive features of the visual medium and lend themselves to celebrity endorsements of products and services. Overall, this situation lends itself extremely well to social commerce via social media marketing. Fashion and luxury brands have specially taken to Instagram marketing – as of February 2017, French fashion house Chanel has over 18 million followers on the social platform, followed by Louis Vuitton and Dior. Despite the huge audience of fashion brands, beauty brands actually command the majority of brand posts and interactions. Overall, the majority of Instagram brand posts are images, with video only accounting for a small share of brand content.

Snapchat is a mobile photo messaging and multimedia sharing app which was released in September 2011 by Evan Spiegel, Bobby Murphy, and Reggie Brown. The app was initially launched to share impermanent pictures via private message ‘snaps’ that can be viewed for a user-specified length of time before becoming inaccessible. Despite its origins as a photo app, video has become an important feature of Snapchat, with more than 10 billion mobile videos currently viewed per day, rivaling Facebook in terms of daily video user engagement. The company reported 100 million daily active users worldwide in May 2015, positioning it as one of the fastest growing social apps and networks worldwide. Snapchat also ranks as the most popular social media site among teenagers and young adults in the United States. During the first quarter of 2017, Snapchat reported 166 million daily active users worldwide.

The core feature of Snapchat is the creation of multimedia messages, referred to as snaps, which can consist of a photo or a short video, and can be edited with text, filters, stickers or other overlays. Snaps can be shared as a semi-public story, which is automatically shared with the user’s contact list, or sent privately. As of the third quarter of 2015, sending messages and photo snaps were the most popular Snapchat activities among active users worldwide.

Snapchat audiences are predominantly young, with the company reporting the majority of users to be aged less than 24 years and a sizeable portion aged 13 to 17 years. A quarter of global Snapchat users access the service more than once per day, and the app ranks ahead of Tumblr and Twitter in terms of U.S. Millennial user engagement.

The platform has also become a cornerstone of social media marketing towards teens and Millennials. Snapchat users are also willing to pay for online and mobile content, with music downloads and TV and movie streaming being the most popular types of paid content. Visually strong brands such as sportswear, beauty and fashion are leading the way in terms of Snapchat adoption. The platform generates the majority of its revenues via advertising and branded content. In the first quarter of 2017, Snapchat’s revenue amounted to 149.6 million U.S. dollars.