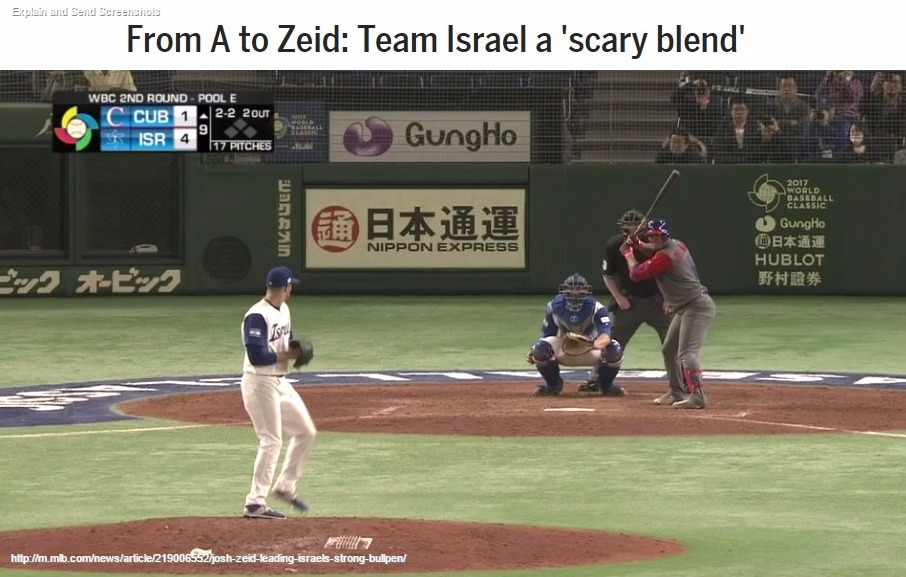 Josh Zeid and Israel’s national baseball team defeated Cuba 4-1 in the first game of the second round of the World Baseball Classic on Sunday, the latest amazing win for the underdog sports team. MLB.com call it: “a ‘scary blend‘”

From The beginning Israel entered this tournament ranked 41st in the world, the lowest-ranked and last team to qualify.

The Israelis beat third-ranked South Korea 2-1 in extra innings in the opening game before topping fourth-ranked Taiwan 15-7 and ninth-ranked Netherlands 4-2 to finish first in Pool A with a 3-0 record.

The Israeli team has become the tournament’s unlikely darlings on its way to a 4-0 start in the international tournament.

“I’ve never played with or seen anyone who wants it as much as Josh Zeid,” Israel first baseman Nate Freiman told MLB. “And we can see that when we play behind him.”

Marquis was out after 69 pitches, which means Israel’s manager Jerry Weinstein won’t let him pitch again in the Tokyo round this week.

Israel added White Sox reliever Brad Goldberg to its roster, and he threw 96 mph fastballs. In the eighth, Goldberg walked Cepeda, who was followed by Despaigne with two outs, and Weinstein called for Zeid, who intentionally walked Despaigne to load the bases, then got William Saavedra to ground to third base.

The World Baseball Classic runs through March 22. Israel next faces Japan, which was undefeated in its first round. Next is the   Netherlands, which it defeated in round 1 4-2.

Should Israel win two out of its three games in Tokyo, it will advance to the semifinals at Dodger Stadium.