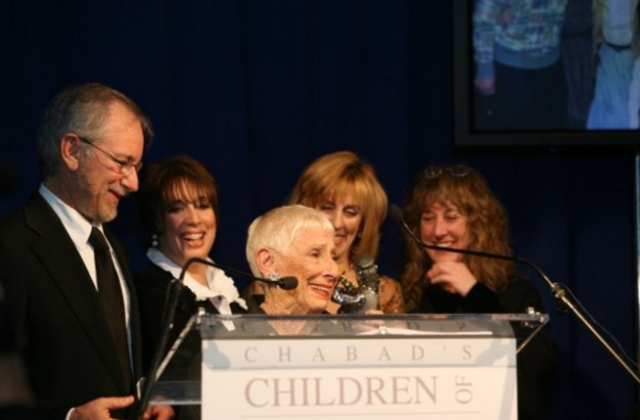 A statement from Spielberg’s production company Amblin Partners said that Leah ‘while known for her red lipstick and Peter Pan collars, for her love of daisies, for her blue jeans and sparkly bling, for her dancing from table to table around the Milky Way, and for her love of camping, fishing, and crossword puzzles, Leah is best remembered for her deep, limitless love for the people around her.’

Steven Spielberg called his mom “my lucky charm” during his 1994 Academy Award speech for Best Director, for Schindler’s List.

Leah Adler was born in 1920 in Cincinnati where she developed a love of music at age five and became an concert pianist and painter. She graduated from the University of Cincinnati with a degree in home economics.

In later years Adler owned and operator of kosher restaurant The Milky Way on Pico Blvd. in Los Angeles, which was decorated with posters from Steven Spielberg ’s movies.

Leah married electrical engineer Arnold Meyer Spielberg in February 1945 and they had 4 children together Steven, Anne, Sue and Nancy.

The family moved to Haddenfield, New Jersey for seven years before moving in 1957 to Phoenix, Arizona, where she owned The Village Shop that showed the works of local artists.

In 1967 Leah divorced and moved back to Scottsdale where she married Bernie Adler.

Twice in her life, in 1992 and in 2013, Adler spoke with 60 Minutes about her divorce from Steven’s father and how he see it influenced the director’s parental figures in his movies.

Leah told 60 Minutes a story about how Steven stood up to their anti-Semitic neighbors: “We lived in an all non-Jewish neighborhood. These people used to chant, ‘The Spielberg’s are dirty Jews.’ And one night, Steve climbed out of his bedroom window and peanut buttered their windows, which I thought was marvelous.” she said.

To People Magazine in 1994 Adler said: “I was a very delinquent parent […] I became a member of my kids’ gang. If they wanted to stay home from school, they did. I’d say, ‘Let’s go out in the desert, guys,’ and then I’d write lying notes to their teachers about gastrointestinal diseases.”

Steven Spielberg, 70, has won the Oscar for Best Director twice for Schindler’s List and Saving Private Ryan. He also known for blockbusters such as E.T. and Jurassic Park.