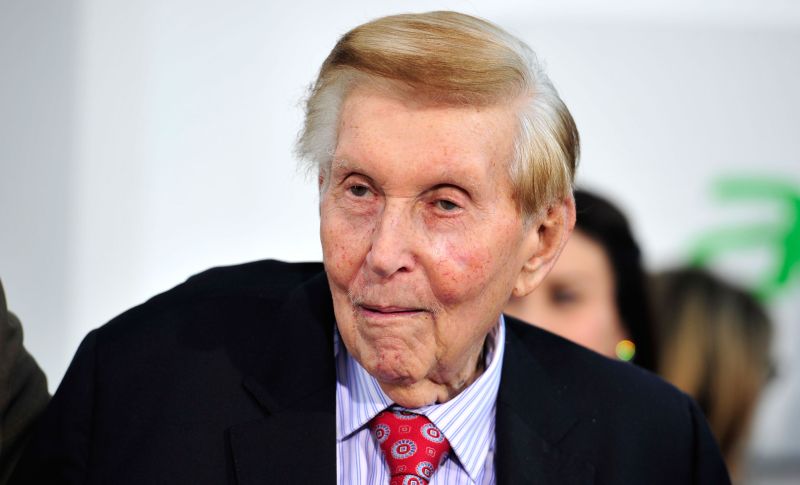 American media billionaire Sumner Redstone will be 91 years old on Tuesday, and lately has been focused more than usual on some estate planning matters it seems.

In the past few months, he is reported to have sold several hundred million dollars worth of shares in the two major public companies he controls: Viacom Inc. and CBS Corp.

In the last ten days alone he has picked up US$236 million, by exercising stock options he held in Viacom and CBS, then selling the newly issued shares into the market. Having also made additional sales earlier in the year, altogether he has provided new liquidity of over US$300 million so far in 2014, mainly through such optioned share sales.

Sumner Redstone is the Executive Chairman of both Viacom and CBS, and the Wall Street Journal reports he has been paying some attention to his estate currently in order to take advantage of various tax benefits – allowing offsets against his option gains, presumably.

Redstone has reportedly also made a number of new philanthropic commitments, including pledges to George Washington University, Harvard Law School, which he attended, and Boston University School of Law, where he once lectured.

Sumner Redstone launched a media empire through National Amusements, originally a family-owned chain of movie theatres. After a number of, frequently hostile, acquisitions, the Redstone family gained control of CBS, Viacom, MTV Networks, and BET, as well as movie production and distributors Paramount Pictures and DreamWorks, and became equal partners in MovieTickets.com.

According to Forbes as of May 2014 Sumner Redstone is worth US $6.1 billion.
Sumner’s father, Michael Rothstein, whose original name of course was later translated into English as ”Red stone, ” included among his business interests the Northeast Theatre Corporation in Dedham, Massachusetts, the forerunner of National Amusements.

Summer received his LL.B., and Doctor of Law, from Harvard Law School. As a great believer in content he invested in Columbia Pictures, Twentieth Century Fox, Orion Pictures, and later Paramount Pictures. Many of these original investments all turned over a huge profit when he chose to sell their stock in the early 1980s.

In 1979, Sumner Redstone suffered severe burns in a fire at the Copley Plaza hotel, in Boston, but survived after thirty hours extensive surgery at Massachusetts General Hospital. Though he was warned that he might never be able to live a normal life, eight years later he was fit enough to insist on playing tennis nearly every day and to launch a winning hostile takeover of Viacom.