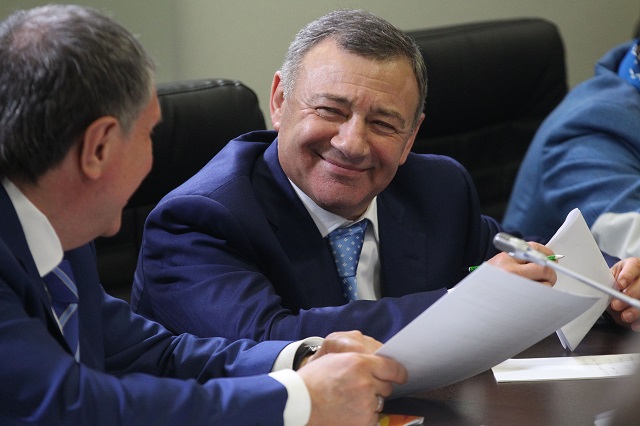 Russian  industrialist Arkady Rotenberg, whose personal fortune is believed to be in the region of $4 billion, has diversified his business interests once again, this time by acquiring a 51 % shareholding in Krasny Kvadrat, regarded as being the largest and most successful providers of TV content in Russia, with their principal customer being Channel One, Russia’s biggest TV network.

Rotenberg’s new partner in Krasny Kvadrat is  Larissa Sinelshchikova, best known as the wife of Konstantin  Ernst, one of Russia’s best-known  TV personalities, who just happens to be the  Director General of  Channel One. Ernst earned himself multiple plaudits  recently, going as high as the Kremlin, for his successful direction of the opening ceremony of the 2014 Winter Olympics, held in Sochi.

Krasny Kvadrat, whose current annual output is well over  1000 television hours with 90% of that going to Channel One, produced a turnover in excess of $250 million in 2013.

Rotenberg, whose interests range from supply and production of natural gas and oil,  airport management,  banking and recently sport is apparently as unfazed as his close friend President Vladimir Putin by the recent sanctions  imposed by the United States on  Russia, with some of the programs that Krasny Kvadrat produces the Russian version of well-known international reality TV franchises.

Arkady Rotenberg  graduated with a bachelor of arts and science at the Leningrad Institute of Physical Culture before going on to build a successful career in the world of commerce and industry.

Arkady Rotenberg is among the most influential businessmen in Russia, enjoying a very close relationship with President Vladimir Putin.

Starting in 2008 Rotenberg began to acquire a number of the major subsidiaries of Russia’s national energy champion Gazprom in partnership with his brother Boris, consolidating them into what became known as the SGM Group, now one of the largest suppliers of steel pipe to Gazprom, as well as operating major construction projects in the energy field.

Arkady Rotenberg owns a majority 51% interest in SGM, as well as a 26% stake in Mostotrest, a major Russian based road construction corporation as owning a controlling interest in the SMP Bank, who will control the TPS Avia Group , in which they own 75% with the remaining 25% being owned by the airport.