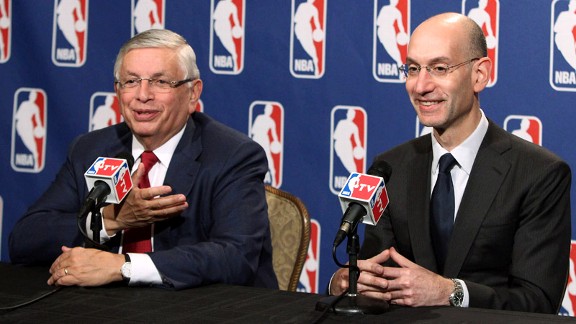 Adam Silver, who stepped up the post of commissioner of the NBA at the beginning of this year after many years as the successor to David Stern, held his  first major meetings with the media at the weekend, before the start of All-Star Saturday Night Festival in New Orleans.

During the session, Silver showed that he had ideas of his own, which he was happy to address during what was his first official press conference.

One of the leading questions that Silver was happy to address was of the growing number of sleeved jerseys that had been appearing on the courts during the season. According to Silver, while there had been some opposition-with some of it fairly vociferous, in general the players were in favor, and if sales were anything to go by the fans were too.

Another hot potato that Silver seemed ready to discuss was the possibility of opening a Pandora’s box of allowing advertising on player’s jerseys at some time in the future. When asked that leading question Silver was candid in his reply stating that he does believe that shirt sponsorship is almost inevitable although it isn’t  something that’s on the immediate horizon, but  it does make good business sense.

According to media reports, during Stein’s time as Commissioner, members of the NBA seriously considered allowing the placement of a  2.5-inch-by-2.5-inch space on the front of the jerseys that would be set aside for advertising purposes. However the idea failed to gain any ground, when it turned out to be considerably more involved than had been anticipated.

Silver, at that  time came out in favor of shirt sponsorship as far back as 2011, stating that the advertising income that it could generate could be worth in excess of $100 million annually. Silver recalled that the reason why the idea was shelved was that the NBA felt that they had been a little premature on the program and a lot more time was required to think it through a little more systematically.

Meanwhile, members of the media were linking the two concepts stating that the introduction of sleeved jerseys would indeed and provide a little more space to add one or two more lucrative sponsor adverts.

Adam Silver, who, while he was Assistant Commissioner of the NBA  featured on a number of occasions on the Sporting News’ “100 Most Powerful People in Sports, has seen his status rise considerably higher in the short time that he has been number one.

Adam Silver graduated from Duke University in 1984 going on earn a  law degree from the University of Chicago in 1988.

After graduation, Silver worked as a litigation associate at the law firm of Cravath, Swaine & Moore, based  in New York, later going on to serve as a law clerk to Judge Kimba Wood, who presided at the  United States District Court for the Southern District of New York.

Silver left the legal profession to be begin working for the NBA in 1992. Before taking up the role of assistant commissioner in 2006, Silver held the positions of special assistant to the commissioner, chief of staff as well as senior vice president of NBA Entertainment before being promoted to president of the NBA.